Despite the Feast of the Assumption’s falling in the middle of the week, the pilgrims arrived in great numbers for the candlelight Rosary Procession and the Vigil Mass in Shrine Park. The crowds grew hour by hour on Tuesday, and by 9 pm people filled the streets and followed the float carrying the statue of Our Lady of Consolation to the park.
Bishop Leonard Blair of Toledo led the recitation of the Rosary and presided at the Mass. Once again, he was accompanied by many of the Diocese of Toledo’s seminarians. 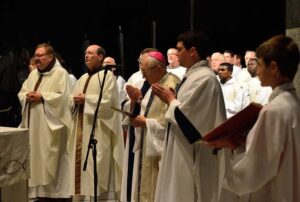 After the Mass, the celebration continued in the campground adjacent to Shrine Park. With music, dancing, fellowship, and food, the pilgrims, many of whom are Chaldean Catholics with roots in Iraq, welcomed the Conventual Franciscan Friars who have been serving during the Novena.
The celebration concluded on the 15th with Masses being celebrated in different rites and several languages and pilgrims from across the region still arriving to take part.
Check out the Province FaceBook page for more photos from the celebration.