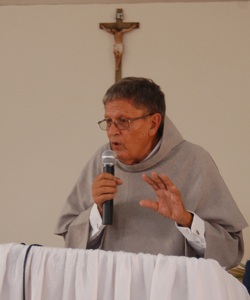 What follows is some of Br. Tony Droll’s description of the event:

The day after!! Yesterday was grand glorious, but the preparations ran down to the last minute. We had been preparing the parking lot as best we could - filling holes in trenches and putting soil where the crane had made ruts in the road. Then the night of the 4th came a downpour and everything was MUD. Up at 05:00am and over to school …by 09:00am we had the road in pretty good condition ... 09:30am was the time to begin. But I had been getting phone calls from the Ministers protocol telling that they were still approaching Kitwe. That gave us about 20 minutes more to sweep, get the mud off our shoes and make last minute preparations.

The weather was perfect – sunshine but not too hot. We had worked till 9pm installing the air conditioners and they began working on the Dedication day morning. Meanwhile the ladies from Home Economics were at the mission in the kitchen preparing for the grand meal (and it was) after all the speeches and Mass.

Every teacher was on their post ready for the entrances of the two Land Cruisers that brought the Minister. Then I get a call saying, we have reached the round-a-bout (4 minutes away). The Head Teacher Barry and Fr. Andrew and I moved to where the two vehicles would enter. When she

(Minister Nkanu Luo) stepped out of the vehicle, … she opened her arms for a hug for Andrew, and then Barry and me. What a lovely lady. She, a professor, was the first woman to get a doctorate in the early days of the country – a strong Catholic active woman. …

I made a strong appeal at the end of my speech asking the Ministry of Education for support for our project of starting a boarding school. It was also mentioned in the Head Boy’s speech. So as we sat down to eat with this grand lady, we kept the subject alive. She was quite positive and promised to send the other Minister, the one for High Schools, to our place and she felt confident that some funds might be found. 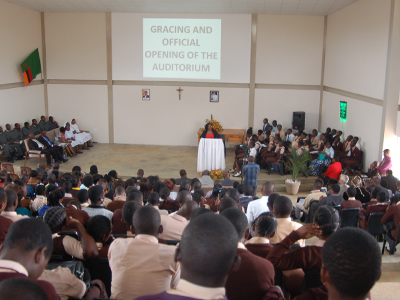