Now 93 years old, Fr. Maurus Hauer is certain where to place the credit for all the good things in his life.

“As I get older, I can see where God had His finger on me,” he said.

Despite the evidence (72 years as a Conventual Franciscan and 66 years of priesthood spent mostly in the missions of the southwestern United States), Fr. Maurus insists he was a sickly child.

“I had rickets and other physical problems, and they had to give me milk with lime water to build up my bones,” he said. “As I grew up, I was so bow-legged my brother said they could throw a bowling ball through me.”

And despite the remarkable achievements of his life, he insists that he was never very smart.

“I was a good athlete here at Mount St. Francis (Minor Seminary),” he said. “I earned three letters one year, but I was a slow learner.” 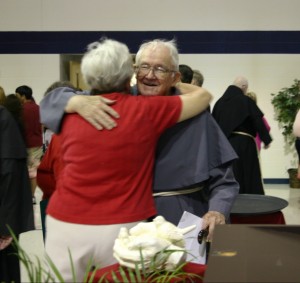 Now living in retirement at Mount St. Francis, Indiana, Fr. Maurus looks back and credits his eighth grade teacher, Sister Mary Gertrude, with planting the seed of his vocation.

“During the last month of the school year, Sister asked if had ever thought of being a priest,” he said. “I told her I had during the time I was in the fourth grade. She gave me a small prayer card, asking me to recite the prayer daily that God would guide me in choosing my vocation. I promised that I would, and put it in my desk so that I would at least say it on school days. I certainly was not sure what I wanted to make of myself.”

Sr. Mary Gertrude sent Fr. Maurus to the pastor, Fr. Seraphim, who answered the door with a curt “What do you want kid?” Fr. Maurus said, “Sister sent me to tell you that I’m interested in becoming a priest.” Fr. Seraphim replied “OK, kid. Now go back to your classroom.”

“The next week when I returned home from school, my mother said ‘Fr. David was here this afternoon and said you told Fr. Seraphim you were interested in becoming a priest.’ I was shocked. ‘Golly,’ I thought, ‘they’re really interested in me!’ The seed of my vocation seemed to begin germinating from that moment.”

The fruits of that vocation have nourished people in parishes and mission churches in New Mexico and in southern Indiana. The first 15 years of his priesthood were spent at San Jose Parish in Carlsbad, New Mexico. When he left, Fr. Maurus discovered that he had performed 2,200 baptisms, including 18 at one time – not bad for someone who insists his ability to speak Spanish is limited.

“Fr. Stanislaus, who was my novice master, was the pastor,” he said. “He was very kind to me. It was like a second novitiate. He sent me over to one of the Spanish Sisters who taught me to speak Spanish. I began with confessions for the children, then when I got better he let me work with the adults. Even then, before Mass I would check the English version of the readings to make sure I knew what I was doing.”

Fr. Maurus’s accomplishments have been recognized several times, most recently as a finalist for the 2010 Lumen Christi Award from the Catholic Extension Society. The award is given to a Catholic who has dedicated his or her life to building long-lasting ministries and serving those living in America’s 86 “mission dioceses.” The citation for Fr. Maurus speaks of how the power of faith can transform lives and communities, noting that Father “is known for being young at heart and a blessing to all who know him.”

The citation also notes that one of Father’s first accomplishments out west was moving Our Lady of Grace Catholic Church, formerly the chapel of the Air Force base in Carlsbad, New Mexico, to its new home in Loving, New Mexico – a distance of more than 16 miles.

Another parish blessed by the fruit of Fr. Maurus’s vocation is St. Anthony in Clarksville, Indiana. While he was there, the parish instituted a tithing and stewardship program that is still making an impact. 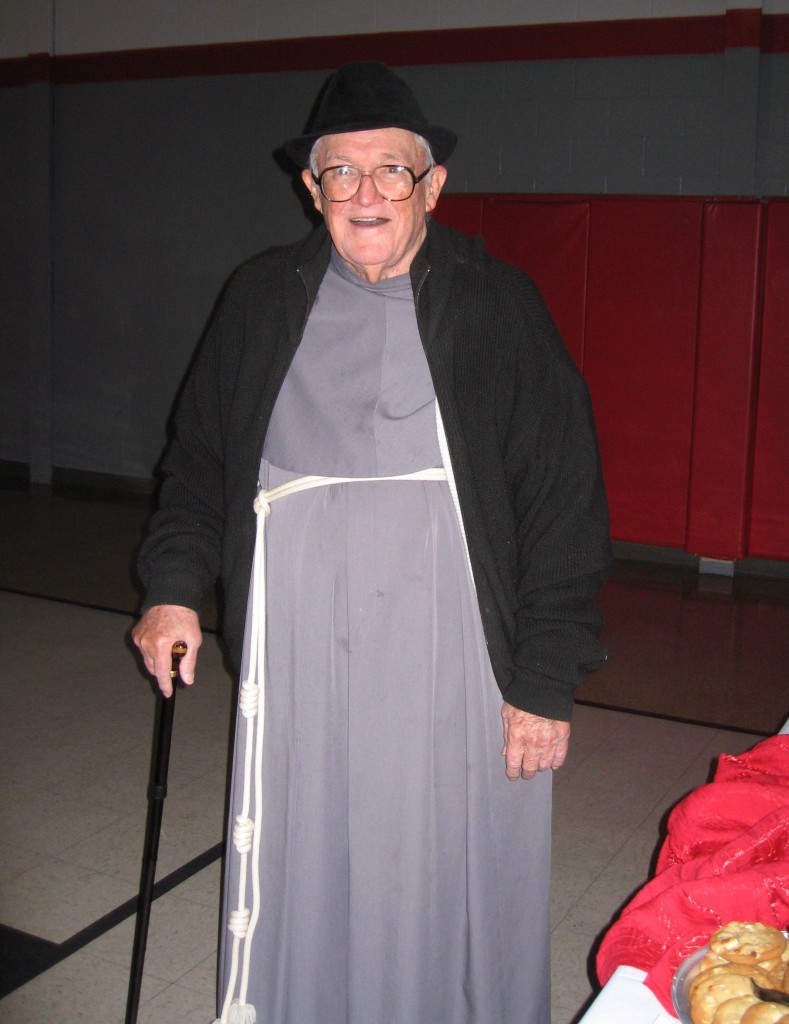 “The pastor at Holy Family in New Albany brought everyone in the deanery in and explained the program to us,” Fr. Maurus said. “He invited us to start it in all the parishes and we decided to all do it together so we could support one another.”

The success of the program enabled the parish to give up bingo games and the parish fund raising picnic, which was replaced by a parish fun day.

“We encouraged the parishioners to give 5%,” he said. “We built the collection up to $2,000 per week (in the early 1960s) and were able to cover school tuition for everyone.”

Now back where he started in minor seminary in 1932, Fr. Maurus enjoys the atmosphere of the Mount.

“I enjoyed life here,” he said. “Back then I worked building a pier on the lake that’s probably long gone now. But I have to say that God has been most generous to me – in the work I was given, in the good people I’ve come to know, and in the company of my brother Franciscans.”