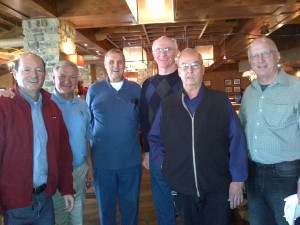 A group of former Mount St. Francis students gathered in the Twin Cities on April 1, 2012.  They met at RedRossa Italian Grille in Bloomington for a few hours of reconnecting and reminiscing.

Tony and Gerlinde Doom drove three hours from Marshall, Minn. to attend.  They were joined by Ken and Gertrud Shallbetter and Paul and Charlotte McDonald.  Dan Tillman and Jim Kaley, Ralph Brown and Bernie Neff, and three friars:  Charlie McCarthy, Richard Kaley and Jim Kent completed the group.  A number of stories were told and, no matter what era a person attended the Mount, there were always some similarities.  It turns out Fr. Ken Waller was one friar all attendees had as a teacher.

Bro. Larry Eberhardt sent a stack of photos along and the group helped identify some of the people in various class pictures.  There was also a CD loop of photos of students from the late 1950’s into the 1970’s.  The loop included some shots of Mount St. Francis today, which in recent years has had renovations to the old school building and the current retreat center wing.