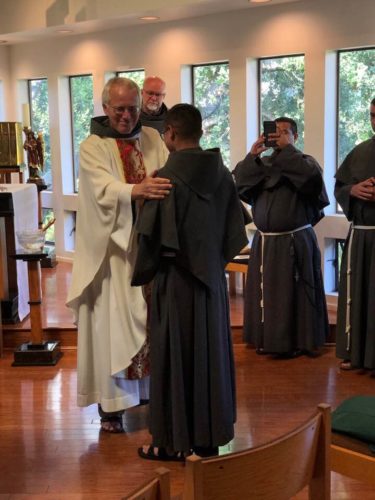 On Wednesday, July 17th, seven men entered the Conventual Franciscan Novitiate in Arroyo Grande, California. They now embark on a journey that lasts a year and a day. This odd year and a day calculation comes from the medieval practice of recognizing a run-away serf as free if he could reside undiscovered in one of the emerging cities for a year and a day. If a novice can persevere for a year a day away from his old life, he too becomes a free man in a new spiritual life.

The novices are now invested in the Franciscan habit. This simple tunic, shoulder cape, hood, and rope around the waist, reflects what peasants wore at the time of St. Francis. The word habit comes from a Latin word habitus meaning to put on a way of life.

Over a year and a day the novices will gain a deeper understanding of Conventual Franciscan life through prayer, in-house classes, and other activities, including outside apostolates such as hospice, prison, and hospital ministries.

Please keep these men in prayer,
as well as all those who are discerning their vocation.