While most of their peers were hitting the golf course or getting ready to cut the grass on a beautiful Saturday morning in late May, a couple of dozen men gathered around tables at the Flaget Center in Louisville, Kentucky. Sitting in four small groups, they talked about how to live their faith. 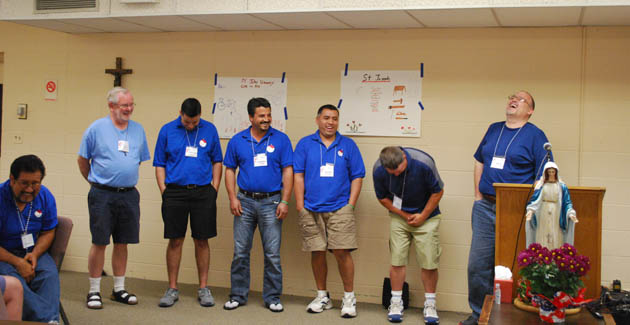 Though there was a lot of laughter and good-natured kidding, mostly there was serious attention to faith and service, as well as a feeling of growing friendship. And it was all built around four basic, but not-so-simple components.

It was an ACTS Retreat; a growing movement around the country, and one the Conventual Friars of Our Lady of Consolation Province have embraced, both as participants and spiritual directors. One of the first-time participants this particular weekend was Fr. Don Halpin, OFM Conv. A retreat leader and spiritual director of many years experience, this time Fr. Don was there to learn. And there was much to absorb.

“What are the simple ways we can serve one another?” one of the lay retreatants asked during a presentation. Answering his own question he said “Sometimes it’s as simple as going to the grocery store and getting something off the top shelf for an older person who can’t reach that high. It doesn’t have to be something out of the ordinary. 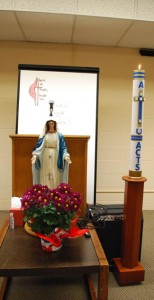 “It’s all part of the main mission – we want to get to heaven.”

He then pointed out that we all share in Jesus’ mission here on earth, that we are all called to be priest, prophet, and king.

“We are priests when we work to help one another,” he said. “We are prophets when we talk about how Jesus is still alive. And we are called to build the kingdom of God here on Earth.”

Most of the first-time participants on this retreat were from Annunciation Parish in Shelbyville, Kentucky. The leaders were a team of ACTS veterans from across Louisville and Lexington, Kentucky, and New Albany, Indiana. J.R. Standlee, from Incarnation Parish in Louisville, helped put the leadership team together.

“It helps build a greater sense of community – the second letter,” he said. “The biggest change you see is the way the community interacts after the retreat is over and people head back into their parishes.”

Although the ACTS Retreats are led by lay people, Standlee credits the clergy for supporting the ACTS movement. His pastor, Fr. Christian Moore, OFM Conv., is a strong proponent of and frequent participant in ACTS Retreats.

“It’s a lay ministry, but we get super support from the pastors,” he said.