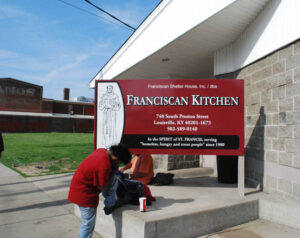 A ministry mixed with sadness and hope, The Franciscan Kitchen serves hundreds of hot meals along with warm hospitality five days a week to the poor in Louisville, Kentucky. Founded by Br. Jim Fields, OFM Conv. in 1980 and originally called the Franciscan Shelter House, the ministry outgrew the original plans. Now it has even outgrown the expanded structure that was built many years ago.

“This new addition has been a couple of years in the works,” said Chuck Mattingly, Executive Director of Franciscan Kitchen. “It expands on Br. Jim’s vision of feeding the poor. It’s a great move by our Board to address the 400% increase in meals we’re serving over the past several years.

“We’ve been bursting at the seams, not only in dining room space, but with the generous donations we receive. Not old food past the expiration date. This is such a wonderful, thoughtful community, without them and our volunteers we couldn’t do what we are able to do each day.” 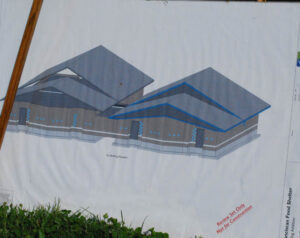 The new addition will add approximately 6,800 square feet to the facility, and provide both a larger dining area and significantly expanded storage space.

“Right now our volunteers are bumping into each other while they’re working,” Mattingly said. “The additional space will allow them to work without having to climb past each other.”

The success is a result of partnership and support between the Kitchen’s Board of Directors, the Conventual Franciscans of OLC Province, and the Archdiocese of Louisville.

“It’s what Pope Francis says about our need to reach out to one another,” said Archbishop of Louisville Joseph Kurtz, a regular volunteer who can be found wiping tables at the Kitchen. “His message has been at the heart of the Franciscan Kitchen’s work for decades. The Archdiocese is proud to be a partner with the Franciscans in reaching out with the dignity that embodies every child of God.” 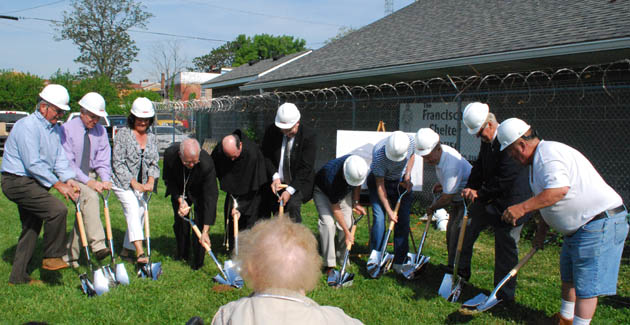