For Fr. Ken Gering OFM Conv., saying “Peace be with you” was more than just words. With his soft voice and gentle manner, he followed the example of St. Francis of Assisi in bringing the peace of Christ’s Good News to all he encountered.

His witty quips could make you laugh or groan, but in his early years as a Friar, Fr. Ken’s even disposition could calm a hectic classroom or Friary. In later years as chaplain in hospitals and nursing homes, he brought quiet consolation in times of crisis. And all through his life brought those gifts to his own family, whether they were close by or far away. 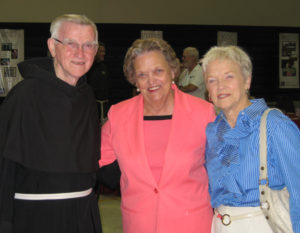 He was born Kenneth Louis Gering on November 16, 1927, in Louisville, Kentucky, to Leonard and Anna (Spath) Gering. He was predeceased by his parents and his brother Donald. He is survived by his brother Robert and sisters JoAnn Miller and Mary Rose Gaus Brown. Receiving the religious name Columban, he professed Simple Vows on July 9, 1952, and Solemn Vows on July 11, 1955. He was ordained a priest on February 23, 1958.

He graduated from St. Xavier High School in 1945, and attended the University of Louisville for one year before joining the Navy. After his service he completed an engineering degree and entered the Conventual Franciscan Order in 1951. As a newly ordained priest, he served at St. Anthony’s Parish in Louisville until 1960 when he began a 13-year assignment as Dean and science teacher at the minor seminary at Mount St. Francis in southern Indiana.

“He was just amazing,” said Fr. Christian Moore OFM Conv., who taught with Fr. Ken. “For several years he was in charge of the students and Guardian of the Friary. He always had patience in stressful situations and times of change. And he was very attentive. If any of the Friars were sick, he would be there every day to look in on them. You could always count on him.”

In 1973 he began the second phase of his Franciscan service when he was assigned as a hospital chaplain in Chicago Heights, Illinois. Except for two brief parish assignments, that would be his focus for the rest of his life. He went on to serve as a chaplain in Lansing, Michigan, and Terre Haute and New Albany in Indiana. 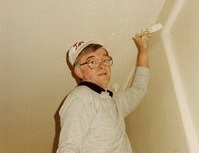 “He found his niche when he became a hospital chaplain,” said Fr. Jim Kent OFM Conv. “He was attentive to the person and family even after they left the hospital, visiting them in their own homes, nursing facilities, and funeral homes. He would work 40 hours in his regular ministry, then spend another 20 hours visiting other places.”

Fr. Christian said that even after returning to the Friary, Fr. Ken kept working. “He was always cleaning the grounds and doing

small tasks to keep things in order — it was like another part-time job,” he said. “But most of all he was a dedicated chaplain. Even outside of healthcare — charismatic renewal, prayer groups, the Knights of Columbus. He was very supportive.” (Fr. Ken served as chaplain to the Knights of Columbus in Harrison County and New Albany in Indiana, and for the Legion of Mary in New Albany.)