On October 12, 2014 Pope Francis will be listing  the ‘Servant of God’, Friar Francis Zirano, a Conventual Franciscan Friar, among the ranks of the blessed.

Friar Francis Zirano, born in 1564 in Sassari, Italy, professed his Franciscan vows in 1580 and was ordained a priest in 1586. In 1599, Pope Clement VIII authorized him to collect funds to ransom Christians who were being held as slaves in North Africa. Friar Francis journeyed to Algiers arriving in 1602.

In early 1603, Friar Francis was captured and condemned to death for being a Christian. He refused to renounce his faith and spent his last days encouraging other Christians in prison. He was martyred on January 25, 1603.

The Christian slaves collected his bones and skin as relics. The Church identified him as a model of life for Christians and an intercessor in Heaven. 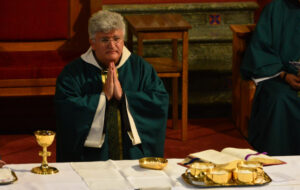 Fr. MarcoTasca, Minister General for the Order of Friars Minor Conventual, points out

"how topical the ministry is that occupied much of the life of our brother martyr, namely, his care for abductees and slaves; those deprived of liberty and exploited with the most blatant disregard for basic human rights. Who are the immigrants of today, if not people suffering violence over and over on their journey towards hope? War, famine, poverty and injustice- all these call into question our identity as friars, as “universal brothers”, able to welcome people without borders and with love expressed in tangible gestures of attention to the person.

Given the characteristics of his life experience, our Francis Zirano would have all the credentials to become the patron saint and protector of the kidnapped, and the enslaved, as well as immigrants crossing desert and sea to recover their freedom. It's up to us, his confreres, to give life and presence to his witness throughout the various ministries that Providence has entrusted to us."

Journey to Sainthood:
Over the last 35 years much work has been done to promote the beatification of Friar Zirano. Study and research took place in archives and libraries – led largely by the Friars Minor Conventual in Sardinia. The process continued with a diocesan inquiry culminating in a public meeting on September 7, 1991 in the Church of St. Mary of Bethlehem, Sassari, where Friar Francis Zirano had lived for 22 years.

After the Dercree of Legal Validity from the diocesan inquiry (6/3/92) an examination of the “Position on the Martyrdom of the Servant of God” was conducted by three sections of the Congregation: Historical Experts (giving their endorsement 3/4/03); Theological Consultors (endorsing on 5/16/13); and Cardinals and Bishops (endorsing 2/4/14).

Then comes the Decree of Beatification signed by Pope. A martyr such as Friar Zirano may be beatified without a miracle. For canonization a miracle must be verified and be in response to the intercession of the candidate saint.