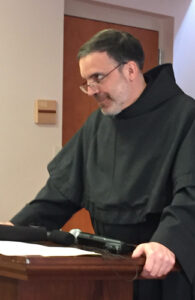 Announcing his dedication to worship and service, Friar John Stowe, OFM Conv. was introduced as the third Bishop of Lexington, Kentucky, on March 12, 2015. He was welcomed at the Catholic Center by members of the Diocesan clergy and the lay staff of the Diocese. His Episcopal Ordination will take place on May 5.

A Conventual Franciscan Friar of the Province of Our Lady of Consolation, Bishop-elect Stowe said that “a Jesuit Pope named Francis has chosen a Franciscan educated by Jesuits to be the Bishop of Lexington.” He added: “When asked if I would accept the Pope’s invitation, I said I love Pope Francis and would do anything he asked.”

Often quoting Pope Francis, and drawing on the Pope’s Exhortation, The Joy of the Gospel, Bishop-elect Stowe spoke warmly about his commitment to the poor and those on the margins of society. He talked about his experience with Catholics in the Hispanic and Latino communities, and how they had formed him as a priest and a pastor.

Bishop-elect Stowe acknowledged that Catholics were only 3% of the population within the large geographic area of the Diocese, but their presence was felt strongly in both of his areas of priority – worship and service.