I leave Assisi this morning with many wonderful memories and blessings. I conclude this last check-in with the blessing of St. Francis, which greets pilgrims as they enter Assisi through the huge “Porta Nuova.”

May the Lord bless you Holy City,faithful to God because through
you many souls shall be saved
and in you many servants of the Most High will dwell
and from you many shall be chosen for the Eternal Kingdom.

This week was highlighted by musical treats, beginning with the Philharmonic Orchestra from Milan performing in the Upper Basilica with music that celebrates life and joyously stirs the soul.

Then the newly installed bishop paid a visit to our basilica “his old stomping grounds” so to speak and celebrated mass with us. Afterwards he joined us in our refectory where the friars served a special meal honoring the bishop and topped it off nicely with some delicious bubbly followed by gelato. I must admit I love the Italian celebrations. 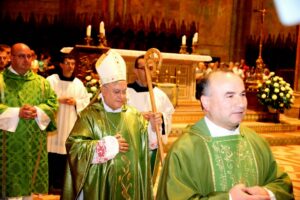 The poor kiddos who attended this week’s “Camposcola” had rather inclement weather. But I’m glad to say that while it altered events that would normally occur, the spirits of the youth were undaunted.

Concluding the week was a “Concert of Gregorian Chant” in the Lower Basilica, put on by the Observant Friars (OFM) who staff the town cathedral.

I am looking forward to the arrival of Friars Bryan Hajovsky, OFM Conv. and Nick Rokitka, OFM Conv., along with the others who are traveling Italy on their solemn vow retreat.

Until next week, ciao from Assisi. 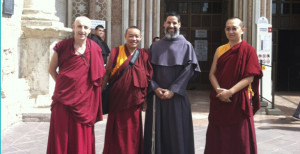 This week began with a wonderful celebration of the final vows of Pietro Zhao Wenbo. Pietro is from China, and many of his family and friends attended the celebration, as well as other Chinese nationals from various religious orders. As I stood in line for the fraternal embrace, the look on his face was clearly the look of a man in love with God. I pray all people experience such devotional love.

Then there was the announcement and promotion of “Festival Francescano” in Rimini September 26-28 2014. It’s a weekend-long event that began in 2009, attended by the Third Order Regulars and friars from the Conventuals, Capuchins, and Observants. It’s considered one of the premier events in Italy promoting Spirituality. Some of this year’s presenters are: Cardinal Luis Antonio Tagle, considered by many the "Wojtyla of the Philippines" for his pastoral charism, the poet David Swift, and an academic named Salvatore Natoli.

The annual “Camposcuola” is the Italian equivalent of our summer bible school. There are five or six groups each year and this week’s group numbered around 125. It’s a week of activities when young people build bonds with other youth from around Italy while enjoying the spirituality and love of Saint Francis of Assisi.

My week concluded with the privilege of conversation with Khangser Tulku Lama, a Tibetan Monk who was meeting with our Friars as part of a continuing Inter-Religious dialogue. Ciao, Ciao from Assisi!!

One Month in Assisi:

It’s incredible how fast time is going here and, unbelievable but true, it’s been a month since my arrival.

This week Fr. Joseph Piemontese OFMConv.,the former Custos of the Sacro Convento, was installed as Bishop of the Diocese of Terni, which is about an hour journey from Assisi. Even though I do not know him personally I experienced a sense of fraternal connection and joy at seeing him acknowledged in this manner. 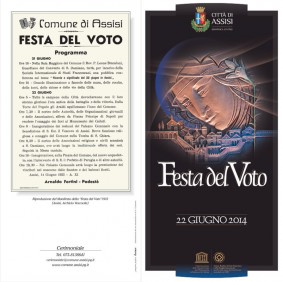 We also celebrated the annual “La Festa Del Voto.” The celebration  began in 1644 to commemorate when St. Clare held up the monstrance and invoked Christ's protection from attacking Saracens. The Mayor of Assisi, the Bishop of Assisi, and multiple religious orders from the area attended the festival.

Another very colorful and interesting event that took place in the Piazza San Francesco just outside of the upper basilica was a visit by the “Danza Chichimeca Guadalupana” from Mexico. They performed for about an hour many different dances and the primal sounds of those drums was awesome.

Finally we had the Grand Rapids High School Choir perform in the Upper Basilica in preparation for their main event in Rome where they sang at the Papal mass on Sunday the 29th of June.  That’s all for now until next week, Pace e bene.

After Two Weeks in Assisi:

Ciao e tutti!!! Today (June 15) marks the end of my second week here in Assisi working as an English-speaking tour guide for our basilica and what a two weeks it’s been. I think our Sacro Convento is the closest example I have ever seen of a world living in Peace. Currently we have some sixty friars from seventeen different countries all living under the same roof, and no matter how poor or rich their home country might be all friars enjoy the same living conditions, same food and clothing. 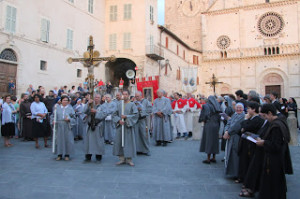 The pilgrims journeying here also span the globe and mingle together in the town piazza sharing good food, wine and stories of who they are and what brought them to Assisi. Just during my short stay we have welcomed visitors ranging from the President of Parliament in Bolivia, the bishop of Assisi, singers from the Georgia Choral, the mayor of Assisi and countless, thousands of students and families from all over God’s green earth.

I hear people speak of a sense of peace experienced here in Assisi like no place they have ever been.  For those fortunate enough to have visited here you understand what I’m speaking about and for those who have not yet been, I pray one day you will be blessed to experience the peace that is Assisi. Pace e bene. 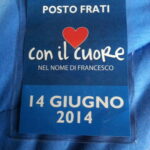 In the week since I sent in my first check in from Assisi we have had many interesting things happening here, or this increased activity could be because I’m understanding Italian better, and now am in the know about other happenings?  In any case on the 14th of June we sponsored an annual event to raise funds for our mission territories with this years recipients of the funds going to the Philippines and Kenya.

The annual event is called “Con Il Cuore” which translates as

“with the heart” and it’s a one night event where artist/singers donate their time and talent to help raise funds.  The event was sold out and had it largest televised audience to date, which fortunately led to the largest donations to date as well (thank you Jesus).  While all the performers were excellent and spanned the gamut of possibilities for entertainment, the final performer was the only one I had heard of and in fact own one of his CD’s and that’s Friar Alessandro. I was fortunate enough to spend some time with him and two other friars in our Sacro Convento prior to the show; despite his rising international status he’s a humble, down to earth friar.

Another annual event that took place this week is our hosting a group of local special needs children. We decorate our refectory (dinning hall) with streamers and other festive items with vibrant colors and welcome them in our home for a meal. This is not only a special time for the children but one small way we try and show our appreciation for those people who dedicate themselves to working with these children. As a show of support the Bishop of Assisi celebrated mass and he and his vicar also attended the meal. 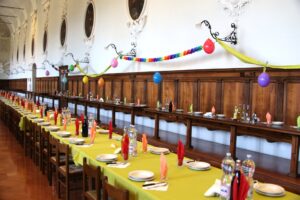 The final event of the week was celebrating the feast of Corpus Christi with a Thursday night procession from St. Peters Church (the one in Assisi) to our basilica of St. Francis and concluded with adoration celebrated by the bishop of Assisi.

That’s all for this week until next time, Pace e bene.