“Mother of the Redeemer,” I gasped, “This path is supposed to be level?” Kris Joseph laughed and concurred as we faced another steep, uphill climb as we walked our day’s portion of the Camino de Santiago in May. As we trudged up another hill on our way to one of our daily checkpoints, it became a sort of ritual to see what kind of expression of dismay I could come up with whenever we faced some challenging terrain.

From May 20-29, Kris and I, along with three other pilgrims, walked from Sarria to Santiago, 103 kilometers. We were part of a group organized by Marly Camino, a company that offers several different options and routes for walking the Camino.

After Fr. Wayne Hellmann completed the Camino in 2005 I became intrigued by the idea of walking it myself. When we showed the film, The Way during our 2012 retreat season, I became even more convinced that I wanted to add this endeavor to my “bucket list.”

Lo and behold, a friend offered to pay for my airfare to Spain to walk the Camino. Family members pitched in with the remaining funds. Kris Joseph, my colleague here at Franciscan Retreats and Spirituality Center, had already talked to me about walking the Camino together and making use of Marly Camino to handle the arrangements; it seemed that everything else was falling into place.

The day that we departed from Madrid (our group rode a bus from Madrid to Sarria, where we would begin walking the following day) the leaders of Marly Camino shared with us the following maxim to guide our walking: “Don’t rush to get there, the place you have to go is inside yourself.” Wise words to ponder as we made our way to the Shrine of St. James.

I had been cautioned by Fr. Wayne not to make the walking into a competition or an endurance test. The pilgrims need to find their own rhythm and listen to body and spirit as they walk. This can be challenging when you are surrounded by pilgrims who can walk at a much faster pace than you. I quickly surrendered what little competitiveness I do possess and plodded along. To tell you the truth, I was surprised at how well I held up. 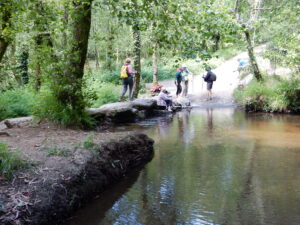 One of the things I had to balance was paying attention to the path and paying attention to my surroundings. The paths are sometimes quite rutted and rocky; you need to look down and focus on the terrain as you walk otherwise you can trip and fall. However, if you spend your entire time walking with your head down, you don’t see anything! I needed to remind myself to stop and look up and around as I walked because I was missing some of the most beautiful farmland and countryside.

What surprised me the most about walking the Camino was how much it brought back memories of growing up on a farm in Nebraska. The sights, the smells, and the sounds were all so familiar to me and a flood of memories gushed forth. I remember stopping and surveying my surroundings when the smell of freshly cut hay wafted through my nostrils. People would be herding livestock along the paths or tractors would be passing us. In one instance, Kris and I started take a wrong turn and a farmer on a tractor honked and gestured for us to follow the path that he had just been on. In another instance, Kris and I stepped to the side of the road so that a farmer who was hauling a large bale of hay, could easily drive by us. We waved and shouted, “Buen Camino!” to him, and after he passed us, he turned, waved, flashed a big smile and shouted, “Buen Camino!” The smile on his face still brings a smile to my face and lifts my spirit.

The warmth and the generosity of our fellow pilgrims and the locals amazed and humbled me. I marveled at how these people accepted us and encouraged us as we traversed their beautiful countryside. 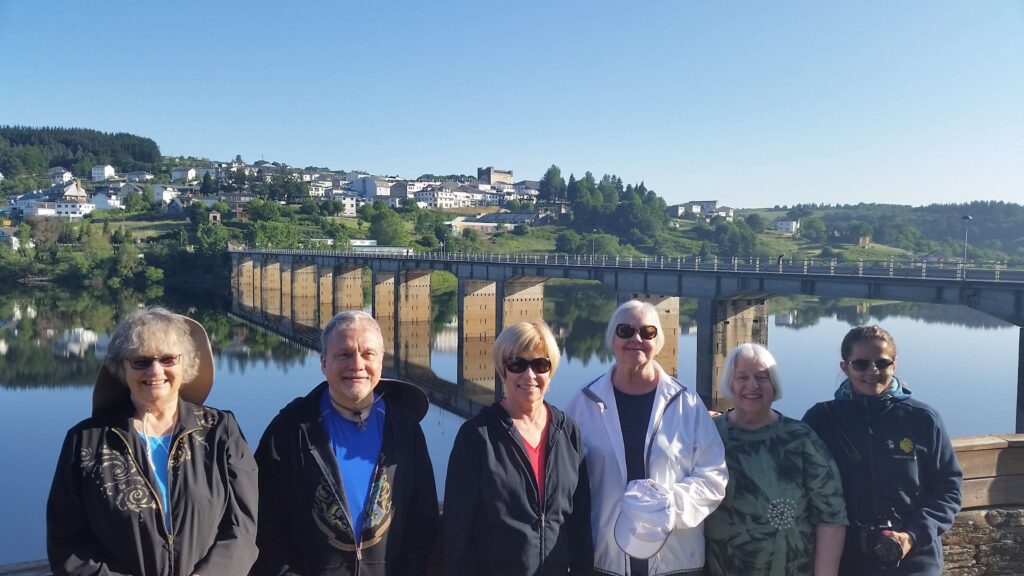 As I walked and prayed for retreatants, friends, and family, I was overwhelmed by the feeling of gratitude. Gratitude for my family and my late parents; gratitude for the Friars and staff at the Retreat House who supported me in my decision to embark upon this pilgrimage; gratitude for the many blessings that I have received in my life as a Friar; gratitude for the wonderful people, living and deceased, who have been a part of my pilgrim journey. I recalled the words of Bro. David Steindl-Rast, “It is not joy that makes us grateful; it is gratitude that makes us joyful.” My joy was abundant during these days.

Our last day of walking took us to our final destination, the Cathedral and Shrine of St. James in Santiago. We arrived well before the noon Pilgrims’ Mass so we had ample time to walk through the cathedral and visit the crypt with the apostle’s relics. We took our places in our pews early as we had been told that the Cathedral would be full; and this was no exaggeration. As the time for Mass neared, streams of men and women of varying ages, backgrounds, and nationalities entered the cathedral and took their places.

Marly Camino had arranged for the massive censer, the Botafumeiro to be used during the liturgy. Interestingly, they don’t bring the censer our before the washing of the hands, but use it after communion, probably because it creates such a sensation, and partly because the transept aisles have to be clear. As the tiraboleiros, the men who work the ropes to swing the censer, brought out the coals and incense, the assembly watched in amazement as the priest stoked the censer and one tiraboleiro gave it a good push. As the men worked the ropes, the botafumeiro began to swing in this amazing arc from one end of the transept to the other. We were a short distance from it and I could hear it whoosh by like an eagle in flight. A group of what looked like second graders were at Mass and they squealed with delight as the botafumeiro would swing over them.

Within moments, incense wafted through the entire sanctuary and I thought of the countless men and women who had stood in this same spot and offered their thanks and praise to the Almighty. While I was quite present to this moment in time, I felt that I had stepped outside of time and joined that great throng of pilgrims who had journeyed to this beautiful place for over a thousand years. Brother David is quite right, “It is not joy that makes us grateful; it is gratitude that makes us joyful.”

Thanks to all who supported me and Kris on our pilgrimage.