Monday: the day after -

Many of the pilgrims who came to Rome for the Canonization, to celebrate and pray and possibly seek healing, have now gone home. Our petitions have been offered and we might now wonder: What's next? Or perhaps, how do we now live with our new saints?

So much anticipation, planning, and prayer went into the Canonization. It can seem somewhat of a letdown after such an historic event. But it needn't be that way.

Saints are meant to be accessible and ones to turn to for inspiration and faith. And their lives have something to teach us and take with us.

Saint John Paul was a man who experienced so much loss early in life. His mother died when he was a boy, and his older brother a couple of years after that. His father died during World War II, and so by age 19 Karol Wojtyla was left very much on his own. He felt a call to priesthood and had to study at an underground seminary for fear of the Nazis. He was ordained on November 1,1946, All Saints Day, and became a bishop and then pope at rather young ages. He overcame an assassination attempt in 1981, and died in 2005 after a very slow and painful death. Between those years he traveled like no pope in history, wrote numerous books, encyclicals and apostolic exhortations. He had also played a key part in writing "Gaudium et Spes," one of the transformational documents that came out of Vatican II. He certainly lived a life of successes and setbacks. 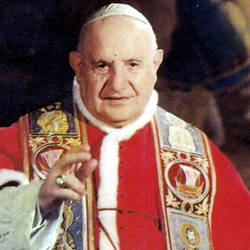 Saint John XXIII became pope at an old age. He was one of 13 children, and had a wonderful way with people. This served him well, whether in pastoral ministry, as a military chaplain, or as a diplomat for the Church in Bulgaria, Turkey/Greece, and France. John was seen as a "care-taker pope" to bide time for a few years until someone more vigorous could be groomed. Instead, he allowed the Holy Spirit to surprise him--and the world--by opening the Church to renewal with the Second Vatican Council. He worked hard to get the Council off to a good start while battling stomach cancer. He earned the title "The Good Pope" for his easy and genuine manner with people, whether world leaders or a person he met on the street. He saw God in all things, which might well have been a reason he became a Secular Franciscan while still a young seminarian.

What do such lives have to teach us?

For one thing, they remind us that those with great faith still experience tragedy, setbacks, and disappointments. Just as Jesus on the way to Calvary, we too walk with burdens and, at times, with suffering.

A second thing they teach us is we do not journey alone. The saints accompany us in our struggles, our doubts and pain. They, too, overcame much in their lives, and their faith can be an example to help strengthen our own faith.

Finally, the Saints remind us of God's enduring presence. Whether as the wondrous Creator, the loving Son, or the ever-present Holy Spirit, God is with us. Saint John Paul often repeated the words so often found in Scripture: Be not afraid. Be not afraid.

May these two new saints be a comfort and a support as we continue our journey to God.

Pilgrims from around the world--especially from Poland and Italy--filled Rome.  Some had processions  throughout the night singing, chanting and saying prayers, all in honor of today's liturgy.

It was a gray morning and at times a light rain fell but it in no way dampened the spirits of hundreds of thousands.  At the beginning of Mass was the Canonization ritual.  It was composed of three petitions beseeching the Holy Father to name Popes John XXIII and John Paul II saints.  During this process, the Holy Spirit was invoked for guidance, and then Pope Francis proclaimed them Saints, "decreeing that they are to be venerated as such by the whole Church."

Shouts and applause followed, as well as the waving of countless flags, both big and small.  The Square was filled to capacity and a sea of people flowed out and beyond down the boulevard that parallels the Tibre River. 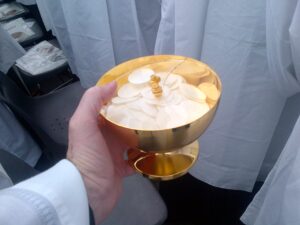 I had the honor of giving out Holy Communion, accompanied by a seminarian who carried a papal umbrella--not for me but for the Body of Christ.  People old and young and who spoke varied languages came and received with the universal response: "Amen."

Throughout the Mass, and in the 90 minutes I was seated prior to the start of the liturgy, I was quite mindful of the prayer petitions I had brought with me to the Canonization.  There were so many needs, some similar, some different, but all asking the Lord for something quite personal for themselves or others.  It was an honor to have these needs become my prayer, our prayer, and bring to the Lord through the intercession of Saint John Paul and Saint John XXIII.

It was an event I'll never forget.  Two Popes who lived and served in my lifetime, proclaimed Saints at a Mass with two Popes present, both Pope Francis and Pope Benedict, Emeritus.

All in all, I can't help but feel your prayers are in very faith-filled hands. 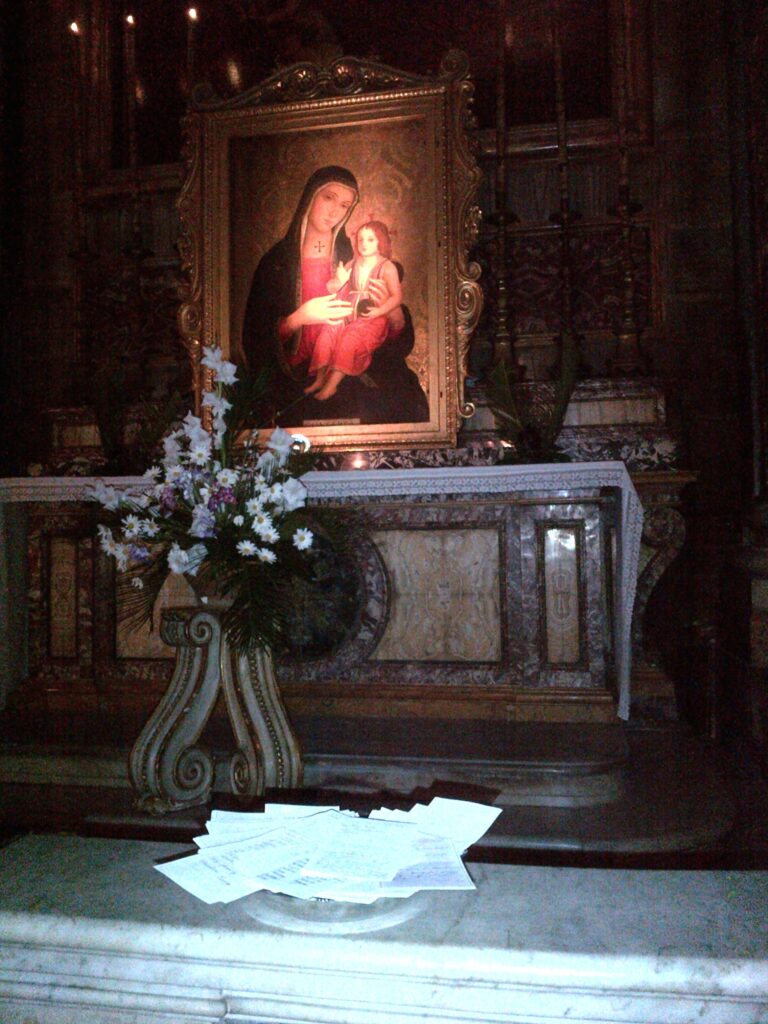 Saturday I offered Mass for all our friends and benefactors.  I specifically brought before the Lord all your many prayer requests.

I also placed the intercession cards many of you had sent before the Blessed Mother altar in the Basilica of Santi Apostoli (the Holy Apostles) and asked her to intercede on your behalf.  I will take these cards with me to St. Peter's for the canonization Mass on Sunday.  What better time to place these needs before our new saints, Pope John Paul II and Pope John XXIII, than on the very day they are canonized.

The cards number about 200 and have well over 1000 petitions handwritten on them.  They came from 31 U.S. states, from Massachusetts to California, from Minnesota to Florida. The petitions represent the breadth of Catholicism and reveal the needs of a people who trust in the wonders and nearness of God.

Today I spoke with an older friar who lives here at the Friary and Basilica of Santi Apostoli, Fr. Liberale Isidoro Gatti.  He's originally from the Venice area and shared with me these two stories.

When the future Pope John XXIII was the Cardinal of Venice, he came to Fr. Isidoro's friary for a private retreat.  As the young friar in the group, Isidoro was asked to care for his needs, to help bring him his meals and coffee. He noted John was very gracious and down to earth.  A year later, before going to the conclave that elected him Pope, John XXIII stopped by the friary and asked the friars to pray that he would not be elected Pope.  Fr. Isidoro didn't tell what his prayer for the conclave was, but he was ecstatic at John's election.

Twenty years later he had a chance meeting with the soon-to-be Pope John Paul.  While on his way to the conclave in Rome the Cardinal of Krakaw's train was late, so he missed his connection and was stuck at the station in Verona.  He wandered down the street and came upon our friary, where Fr. Isidoro was assigned.  He fed John Paul a late dinner, got up early to open the church and serve Mass for the Cardinal, and then got him to the train.  To everyone's surprise, a short time later this Cardinal from Krakaw was elected Pope John Paul II.
Today, Fr. Isidoro is stationed in Rome where these two men, he met long ago and who became Popes, will now be canonized saints. 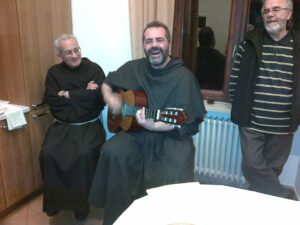 As if the canonization weren't  enough, today we celebrate the Feast of St. Mark, whom Scripture scholars think was the first to write a Gospel.  In Italy, many friars celebrate their name's day as opposed to their birthday.  Two friars here at Santi Apostoli, Minister General, Fr. Marco Tasca, and Br. Mark Folger (from the US) have given us cause to celebrate this Feast all the more with prayer, food and singing. 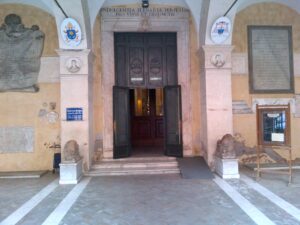 I visited this evening with Fr. Kevin Hanley, OFM Conv., one of our friars who works in the Vatican as an official confessor.  This is a ministry the Conventual Franciscans have had for more than 200 years.  Fr. Kevin is originally from Dublin -- and very proud of his Irish heritage.  He also lives at the friary for confessors in the Vatican and reports the media and pilgrims are growing in numbers in anticipation of Sunday's canonization.

I arrived in Rome Thursday morning along with a plane full of other religious, clergy and pilgrims who have come for the canonization.  I am staying at the our curia (headquarters) for the Conventual Franciscans called Santi Apostoli, "the Holy Apostles." There is a lot of excitement in the air.

Fr. Jim Kent, OFM Conv., our Minister Provincial, is on his way to Rome for the Canonizations of Popes John XXIII and John Paul II. He will arrive early Thursday morning, carrying with him more than 1,000 prayer petitions from the friends and benefactors of the Province of Our Lady of Consolation.

Please keep returning to our website over the next week for updates and pictures from Fr. Jim's pilgrimage. He will be close to the center of the proceedings, and should be able to give us a great view. 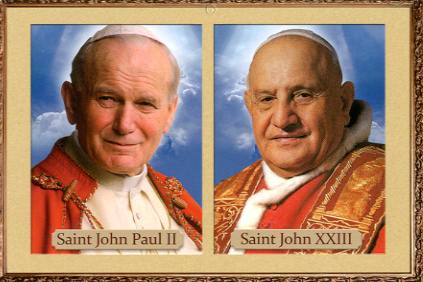