On the occasion of his 100th birthday, in 2017, Friar Maurus Hauer OFM Conv. said, “I can look back at my life and see that the Lord had his finger on me.”

Fr. Maurus died in New Albany, Indiana, on February 17, 2019. He was born Raymond Francis Hauer to Edward George and Theresa Marie (Ferguson) Hauer on October 7, 1917, in Terre Haute, Indiana. He was predeceased by his parents, three brothers, and two sisters, and is survived by four nieces, one nephew, and several great-nieces and -nephews. 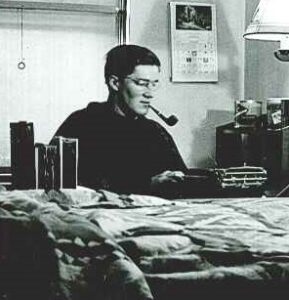 He was a student at the Mount St. Francis Minor Seminary during the Great Depression and entered the novitiate in 1938. He professed Simple Vows on August 17, 1939, Solemn Vows on August 17, 1942, and was ordained to the priesthood on February 24, 1945. At the time of his death Fr. Maurus was Dean of the Conventual Franciscan Order, the oldest friar.

Even though Friar Maurus was always humble about his abilities, his achievements tell a different story. He served most of his life in the Southwestern part of the United States, which was essentially mission territory. Working with the other friars to organize scattered Catholics into parish communities, Fr. Maurus baptized thousands of babies and adults during those years.

Also, in the aftermath of World War II, he moved a decommissioned army chapel from the base where it had been used during the war, to the site where it still serves today as a parish church in Loving, New Mexico. His pastoral service took him to parishes and mission churches in Carlsbad, Hobbs, Malaga, Artesia, and Loving, New Mexico; Broken Bow, Nebraska; and Clarksville, Indiana. 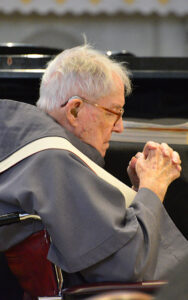 Fr. Maurus’ prayer life grew even deeper as he aged, and in his years of retirement he prayed constantly for his brother Franciscans, their ministries, and all the people he had baptized and served. When he learned of natural disasters or people with personal crises, those were added to the list.

Fr. Maurus was an avid card player. Up to the end, one of the friars would visit with him to play every Sunday evening at the care center where he was living, often bringing him a little ice cream (one of his other pleasures). In 2010 he was nominated for the Lumen Christi Award by the Catholic Extension Society, honoring his nearly eight decades of service to the mission areas here in the US. He said he was relieved when he didn’t receive the award, because he was too old to travel to the event. And that reveals the quality his brother Franciscans loved best — the quiet humility and ever-present smile of a friar, one of St. Francis’ little brothers. 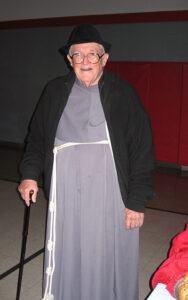 Memorial gifts may be made to the Province of Our Lady of Consolation, Mission Advancement Office, 103 St. Francis Boulevard, Mount St. Francis, Indiana, 47146 or online by clicking here.