Inside the Vatican walls there is a large, dormitory-type building housing Conventual Franciscan Friars from all over the world. They come for varying lengths of time, but all with the same purpose: they offer the Sacrament of Reconciliation to pilgrims at St. Peter’s Basilica in 15 different languages.

From December 1999 through July 2000, Fr. Simon Sauer, OFM Conv., a Friar of the Province of Our Lady of Consolation, lived in the Penitenzieri, the name of the building, and served as one of the confessors.

“We worked six days a week, three or six hours a day,” he recalls. “There were three-hour shifts – one in the morning and one in the afternoon, depending on the day of the week and the number of pilgrims. During the Holy Year 2000 there were about 20 or so of us in the confessionals at any given time.”

Each confessional has a sign indicating the language spoken by the Conventual Friar inside. Fr. Simon’s said English, of course, but word about him got around.

“There are many types of English, not just British and American,” he said. “Very seldom did I get English people or Americans. There is German-English, Italian-English, Spanish-English – you name it. My lines were short at first but grew longer as time went on. People said: ‘He knows all Englishes.’ I also got the reputation as an easy confessor.”

Since he lived inside the Vatican, he was able to enjoy many things ordinary tourists never get to see.

“I was able to walk through the Vatican Gardens and say the Rosary,” he said. “It’s the Pope’s residence, of course, but there are other buildings too. There’s even a railroad track in there.”

It wasn’t all work. Fr. Simon had Thursday’s off and explored Rome. 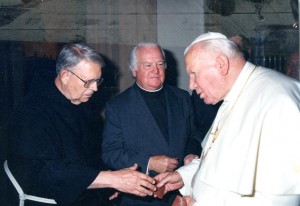 “I learned to use the buses and subway, the trams and streetcars,” he said. “I visited different churches and saw the historic sights. I even had a chance to go spend some time in Assisi.”

And at the end of his stay, the day before he left for the US, Fr. Simon received a special privilege: he was invited to Mass with Pope (now Saint) John Paul II, in the Pope’s private chapel.