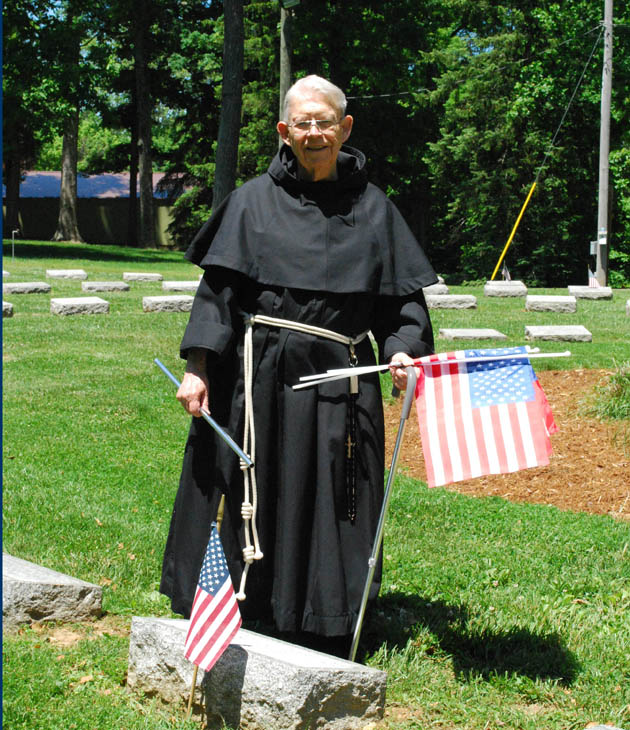 Beloved missionary, sought-after confessor, and dedicated chaplain, Fr. Simon Sauer combined a Franciscan spirit of compassion and love for God’s people with a sense of humor to bring the Gospel to those in need. Though he was recognized here in the US, across Zambia, and in Rome for his many gifts and talents, he was a man of great humility who wanted everyone to know that “I owe all I have and all I am to the Lord.”

“He was not one for rules and constitutions,” said Fr. Wayne Hellmann OFM Conv. “But his life was grounded in the first line of the Rule of St. Francis. (The rule and life of these brothers is this: to live in obedience, in chastity, and without anything of their own, and to follow the teaching and the footprints of Our Lord Jesus Christ…) The heart of the Rule is the Gospel.”

Friar Simon Sauer OFM Conv. died August 7, 2017, in New Albany, Indiana. He was born Donald Anthony Sauer, in the Germantown area of Louisville, Kentucky, to Edward and Helen (Droppelmann) Sauer, on February 5, 1930. He was predeceased by his parents, and is survived by his sister Joan Murta (James) and brothers Kenneth (Betty) and Edward (Marilea). 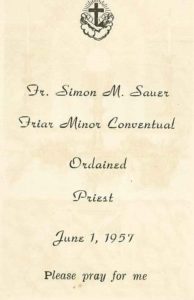 Donald was educated at St. Vincent de Paul grade school, St. Xavier High School, and St. Mary College, Lebanon, Kentucky. He entered the Conventual Franciscan Order on July 4, 1950, at Angola, Indiana and was given the name Simon. He professed Simple Vows July 6, 1951, and Solemn Vows on July 8, 1954. After six years of seminary studies at Assumption Seminary, Chaska, Minnesota, where he was in the first class of the new institution, Simon was ordained a priest in St. Paul, Minnesota, on June 1, 1957.

After serving for two years as assistant pastor at St. Paul Parish, Pleasure Ridge Park, Kentucky, he was assigned to the mission in Northern Rhodesia (now Zambia). In September 1959 he received the Foreign Mission Cross from Louisville Archbishop John A. Floersh at St. Anthony Church. 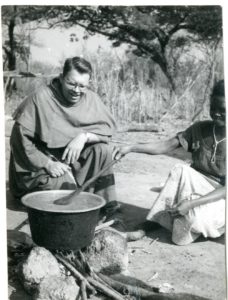 Fr. Simon described himself as “mainly an itinerant bush missionary for 20 years,” but toward the end of his missionary service he was elected Custos of the Our Lady of Consolation Custody. During four different assignments he ministered mostly to the Lunda people in Mwinilunga and in Manginga. He admitted that it was only with difficulty that he was able to learn the Lunda language.

“Even though he didn’t have a full command of the language, he communicated through his compassion for the poorest of the poor,” Fr. Wayne said. “Even going to the shantytowns, he spent his visits with the poorest of the poor. He not only went to the margins, he went to the farthest margin of the margins. He encountered and encouraged the people, even with the little of the language he had.” 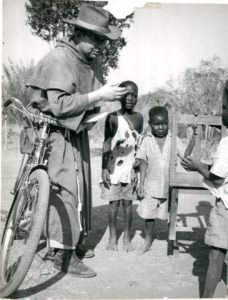 In Zambia, he also earned a great reputation as a confessor, not only for the Zambian people, but also for his fellow Friars and other religious and clergy.

“He knew himself, his difficulties and his failings,” Fr. Wayne said. “That gave him the ability to be compassionate for his brothers. This made him a great confessor for the Friars and for other religious and clergy. His weaknesses became strengths in helping others.”

This reputation led later to his being chosen to hear confessions in Rome during the Holy Year of 2000. In Rome he lived as a pilgrim Friar, hearing confessions in the Vatican several hours a day, several days a week, but most of all visiting the churches, shrines, and holy places. He spent many hours walking the Vatican Gardens, praying his Rosary.

On Holy Thursday of that year, he was asked to be one of the twelve people to have their feet washed by Pope St. John Paul II. Later, before leaving Rome, he had the privilege of concelebrating Mass with the Holy Father in his private chapel.

After returning to the US, Fr. Simon spent 25 years as chaplain at several hospitals, including the Walter Reed Medical Center, Washington DC, the VA Medical Center in Louisville, and for the Little Sisters of the Poor in Louisville. He also served for short periods in pastoral ministry in Terre Haute, Indiana, and Carey, Ohio.

After his ‘retirement’ in 2008, Fr. Simon served at the Franciscan Kitchen three days a week, served as confessor for three communities of women religious, and offered Mass at nursing homes.

The Mass of Christian Burial took place at Mount St. Francis on Thursday, August 10,  followed by interment in the Friars’ cemetery.

Memorial gifts to the Conventual Franciscan Friars may be sent to
The Province of Our Lady of Consolation, Development Office, 103 St. Anthony Dr., Mount St. Francis, IN 47146 or by clicking here.