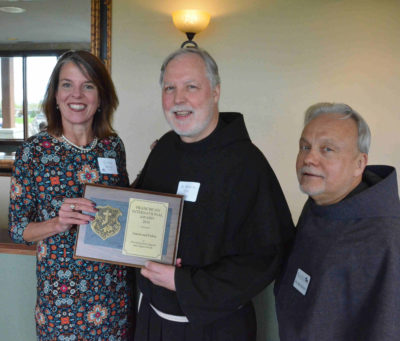 On Thursday, May 9, the 61st Franciscan International Award was presented to Loaves and Fishes of Minnesota, an organization dedicated to providing nutritious meals to anyone in need, in an atmosphere of hospitality at site locations where the need is greatest. Loaves and Fishes began in 1982 with one site each in St. Paul and Minneapolis, and now serves 3,000 healthy meals daily at more than 80 meal outlets. Loaves and Fishes is present in nine Minnesota counties, and is the largest free meal program in the state.

Each year the Order of Friars Minor Conventual presents an award to an individual or to an organization committed to serving the Ideals of Christ, especially as proclaimed by St. Francis of Assisi. This Franciscan International Award is presented on behalf of the Conventual Franciscans by Franciscan Retreats and Spirituality Center, Prior Lake, Minnesota.

The Franciscan Order was founded in 1209 as an Order within the Roman Catholic Church by St. Francis of Assisi. St. Francis had many devoted friends and benefactors among the inhabitants of his native Italy. Many of these were especially honored by being awarded honorary membership with the Franciscan Order. So from the very beginning of the Order, individuals who served others in an outstanding way were given a “Franciscan Award” for their acts of charity. That custom endures to the present day and was the basis for reestablishing the Franciscan International Award In 1959. (For more about this award, including a list of past recipients, click here.)