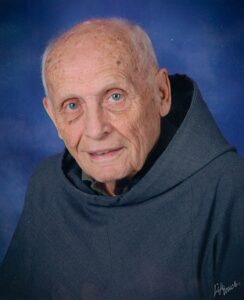 To Friar Berard Marthaler, OFM Conv., the life of faith was a journey that required Catholics to meet and get to know God. Going beyond the basic catechism, Fr. Berard spent his life giving generations of people a deeper, richer understanding of Catholic history and theology.

From his writings on the Creed to his series of books teaching children the Catholic faith, he brought the truth of the faith to countless people. As a professor for nearly 50 years, he taught and mentored thousands of students. He served as a consultant on catechesis to the US Conference of Bishops and to Pope John Paul II. 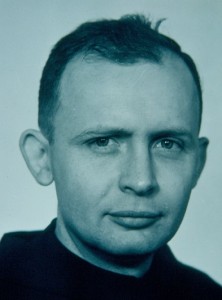 He was very fond of his family, and loved spending time with them. He is survived by his brother Edward J. Marthaler (Phoenix, Arizona), his sister Carol (Marthaler) Klos (Lebanon, Illinois), and 15 nieces and nephews. He is predeceased by his parents and his brother Raymond C. Marthaler.

With his brother Franciscans, he enjoyed a good argument. He never failed to have an opinion on a topic, normally one at odds with the general agreement. He liked to set up the house betting pools on sporting events. He had a great interest in coins, and that interest was the cornerstone of his doctoral work in history on the coins of the ancient Roman and Hebrew world. 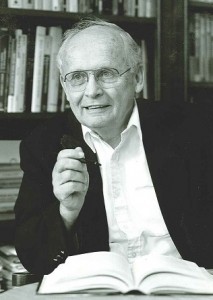 A celebrated scholar and teacher, Fr. Berard earned his S.T.D. from the Seraphicum in Rome, Italy, and his Ph.D. from the University of Minnesota. He taught at Assumption Seminary in Chaska, Minnesota, from 1953 to 1961, Bellarmine College in Louisville, Kentucky, from 1961 to 1963, and at Catholic University in Washington, DC, from 1963 until his retirement. Among other distinctions, he was Warren-Blanding Professor of Religion at Catholic University from 1990-1997, and Chairman of the Department of Religion and Religious Education from 1967-1983. He was also a catechetical consultant to the Sacred Congregation for the Clergy. Among his publications are The Creed: The Apostolic Faith in Contemporary Theology and several books on catechesis. He was executive editor of the New Catholic Encyclopedia (2002) and, from 1972-2004, The Living Light, the USCC’s catechetical review.

Memorial gifts may be made to the Conventual Franciscan Province of Our Lady of Consolation, Development Office, 103 St. Francis Blvd. Mount St. Francis, IN 47146 or by clicking here.

Fr. Berard (2011) reflected on the roles that hope and faith play in our lives.

"In our old age, we have hope and trust in God and in those who will come after us, to carry on the ministry of the Word, in the service of the Lord, in the spirit of the Lord Jesus."