As part of the initiation rite into the novitiate, Friar Don Bassana, OFM Conv. was invested in the Conventual Franciscan habit on Thursday, July 19, 2012, at St. Francis Novitiate in Mishawaka, Indiana.

He was joined by eight other new novices from the other four Conventual Provinces in the United States. 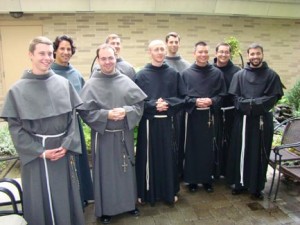