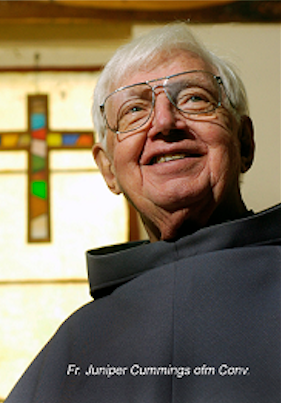 He was a gifted scholar, teacher, administrator, and spiritual guide, but Fr. Juniper Cummings is best known as a Friar whose life was filled with Franciscan joy. That spirit of celebrating life was the foundation of his service as he brought people closer to God and one another.

Friar Juniper Cummings, OFM Conv., died Friday, May 26, 2017, in Shakopee, Minnesota. He was born Francis Leonard on September 4, 1924, in Louisville, Kentucky, to Francis and Wilhelmina (Krimm) Cummings. He is pre-deceased by his parents, his brothers, Albert and Frank, and his sister, Mary Frances (Jones.) He is survived by his niece, Jane Gray of Henderson, Kentucky, his nephew, Danny Jones of Louisville, Kentucky, and his cousin, Cathy Targonski of Bardstown, Kentucky, hundreds of other cousins, and many dear friends.

He attended minor seminary at Mount St. Francis, Indiana, and entered the Conventual Franciscan Order in 1944. He professed Simple Vows on July 15, 1945, and Solemn Vows on October 4, 1948 at the Basilica of St. Francis in Assisi. He was ordained a Priest on October 15, 1950 at the Church of Cordeliers, Fribourg, Switzerland.

After returning to the States, he taught at Assumption Seminary in Chaska, Minnesota and was much involved in a program of theology for the laity. He also taught at the Carey Seminary, St. Bonaventure University, Catherine Spalding College, Bellarmine University, as well as the Beda and the Seraphicum in Rome. He gave retreats, lectures, and workshops all over the U.S., as well as England, Africa, and Australia.

While serving as the Director of Development for the Province at the age of 65, he received a phone call from Zambia informing him that he had been elected Custos for the Custody of Solwezi. He accepted the position thinking he would only be there for a few years. He ministered in Zambia for 21 years. One Friar observed that it seems that Fr. Juniper’s whole life had prepared him for this important role, one he took on at an age when most people retire.

When Fr. Juniper told the story of his vocation, he would begin by saying that as a young boy he wanted to work as a trash collector because he thought it looked like fun. He would finish by saying how happy he was as a Friar – that he had traveled the world and done things he never would have been able to do otherwise – and with the exclamation: “It’s fun to be Franciscan!” Fr. Juniper lived his life joyfully and shared that joy with everyone around him.

Visitation will take place Tuesday, May 30, at 5:30 pm with Mass of the Resurrection to follow at 6:30 pm at Franciscan Retreats & Spirituality Center, 16385 St. Francis Lane, Prior Lake, Minnesota 55372

A Wake Service will be held in the Chapel at Mount St. Francis, Indiana, on Thursday, June 1, at 7:00 p.m. The Funeral Mass will be at 11 a.m. on Friday, June 2. A luncheon will be served following Mass.

Memorial gifts to the Conventual Franciscan Friars may be sent to The Province of Our Lady of Consolation, Development Office, 103 St. Anthony Dr., Mount St. Francis, IN 47146 or by clicking here. 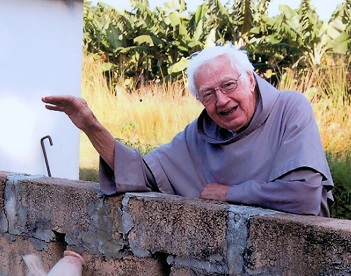