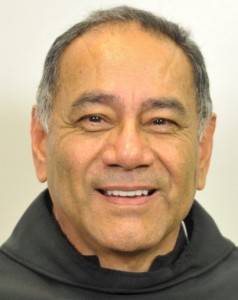 Friar Ray Ramos, OFM Conv., served as a Conventual Franciscan for 38 years, bringing his gregarious, warm nature and friendly smile to all he met, and continuing the Franciscan commitment to the poor.

Br. Ray passed away on July 31, 2012, at Providence Retirement Home, New Albany, IN. Born Ramon Antonio Ramos in Ojinaga, Chihuahua, Mexico, on January 20, 1946 to Ignacio Severino Alvarado and Basilisa Ramos Navarrette. He is pre-deceased by his father and his brother Ruben Navarette. He is survived by his mother and two brothers, Eloy Navarette (Carlsbad, NM) and Efrain Navarette (Pecos, TX).

He entered the Conventual Franciscan Order in 1967 and professed solemn vows on January 22, 1974. Br. Ray’s many years of service took him to Ohio, Minnesota, Missouri, Michigan, New Mexico, Kentucky, and Indiana.

A vigil of remembrance was held Sunday August 5 at the Chapel at Mount St. Francis, IN. The Mass of Christian Burial was Monday August 6. A Memorial Mass was celebrated at the Basilica and National Shrine of Our Lady of Consolation in Carey, OH, on Wednesday August 8.

Memorial gifts may be made to The Province of Our Lady of Consolation, 101 St. Anthony Drive, Mount St. Francis, IN 47146 or by clicking here.