The Heart of a Missionary, A Deep Devotion to Zambia and Its People 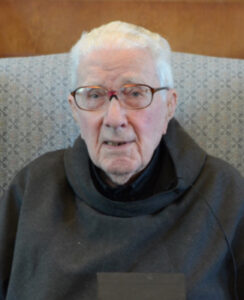 Fr. Terence Tobin returned to the United States in 2013 after serving more than 50 years as missionary in Zambia. But he never really left the country or the people he loved and served so well. He spoke of the greatness of the Zambian people, and how they strove to build their country after achieving independence. He was known for ending his talks by singing in a clear, proud voice the Zambian national anthem.

Friar Terence Tobin, OFM Conv., died Tuesday November 17, 2015, at St. Francis Senior Ministries in Tiffin, Ohio. He was born William Patrick Tobin February 1, 1923, in Marion Ohio, to Maurice and Clara (Mulvey) Tobin. After serving in the US Navy during World War II, he entered the Conventual Franciscan Order in 1946. He professed Simple Vows on July 13, 1947, and Solemn Vows on July 14, 1950. He was ordained a Priest on May 30, 1953. After eight years in pastoral and education ministry in Ohio, he left for Africa, where he served as a missionary for more than 50 years in Zambia (formerly Northern Rhodesia).

He was pre-deceased by his parents, his sisters Theresa Mayer, Kathleen McAndrew, Sr. Moira Tobin, SC, (Clara) Eloise Vogel, Anna Mae Johnston, brothers Maurice Tobin and Fr. Robert Tobin, MM, and a niece. He is survived by his brother and sister-in-law Frank and Noreen Tobin, sister-in-law Jean (Maurice), 30 nieces and nephews, and many great-nieces and nephews.

“We saw him as a very faithful servant of God,” said Joe Tobin, Fr. Terence’s nephew. “We loved his homilies – he went back into history and explained things. Distributing the sacraments was the most important part of his life.

“Even though he was in Zambia for 50 years, he had a great relationship with each of his nieces and nephews. He was interested in all of us and our lives. He was fun, he liked to sing, and he had a great sense of humor. I remember he introduced us to Frisbees. He was fantastic for us.”

Joe Tobin also talked about Fr. Terence’s Franciscan spirit, especially his commitment to poverty: “Whenever we would get him new things, he would give them away.”

It was that Franciscan commitment that Fr. Wayne Hellmann, OFM Conv. remembers:

“When I met him in Zambia, what impressed me was how engaged and dedicated he was to the St. Francis mission, the parish work and the teaching of young students. He was proud that he could serve so many people, especially the children.

"Then, later, when he was at Sacred Heart Mission in Ikelenge, he was known as ‘the man who prays.’ So he developed from a very intensive, active worker in service to the poor, to a more intensive, contemplative prayer life when he had to be less active.

“He worked hard, he prayed hard. It is a great model of our life, the lifetime of a Friar.” 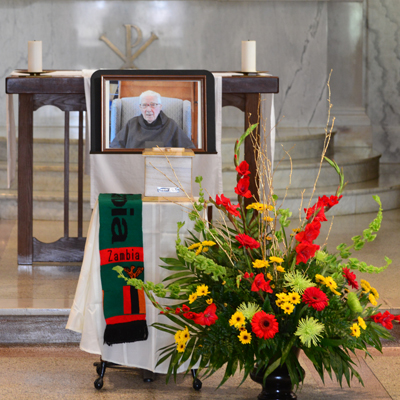 A Mass for Fr. Terence was held  November 21st at the Basilica of Our Lady of Consolation in Carey, Ohio. A Mass took place on November 24th in the Chapel at Mount St. Francis, Indiana. Memorial gifts to support the Missions of the Conventual Franciscan Friars may be sent to The Province of Our Lady of Consolation, Development Office, 103 St. Anthony Drive, Mount St. Francis, Indiana, 47146 or made online by clicking here.