The General Chapter  of Conventual Franciscan Friars opened in Assisi, the town of St. Francis and St. Clare, on Saturday, January 19.  There are 99 delegates from all over the world. Friar Jim Kent (Minister Provincial) is representing the Province of Our Lady of Consolation (OLC). Friar Mark Weaver is there to help with translation. The Chapter began with Solemn Vespers, followed by a ceremony where photos of the friars and publications representing the history of Provinces and Custodies around the world were placed under Francis' tomb.

Monday, January 22, the Minister General, Fr. Marco Tasca, OFM Conv., reported on the state of the order - whose fraternity is spread throughout 65 countries. An intense day of work concluded with Vespers - in Spanish, English, Polish, and Italian.

Fr. Mark Weaver sent in the following update from Friday, January 25th:
Friar Jim (Kent) and I have been in Assisi at the General Chapter of Friars for a week now.  Friars from all over the world are evaluating how well we are living the Gospel Life. Just about everything gets translated into Italian, Polish, English, and Spanish. It can get hectic with friars scurrying around trying to get written texts to the Chapter members and the simultaneous translators (including yours truly) sweating while trying to give reasonable translations. 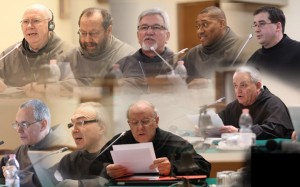 Fr. Jim Kent sent us the following news very early this morning (Tuesday, 1/29): Fr. Marco Tasca was reelected Minister Provincial for the Order of Friars Minor Conventual. There remains much work to do, including the election of the General Definitory, work on the new six year plan, and dealing with many proposals. Please pray for Fr. Jim and Fr. Mark as they continue this important work for the future of the Order.

Fr. Jim sent us these photos of the Papal Audience, February 6 (a week before the Pope announced his retirement). All the General Chapter participants attended along with a number of Conventual Franciscans who are Bishops throughout the world. 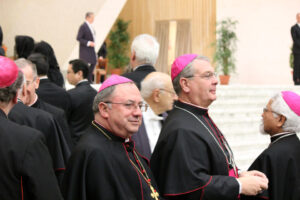 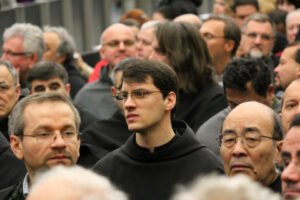 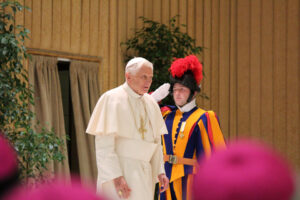