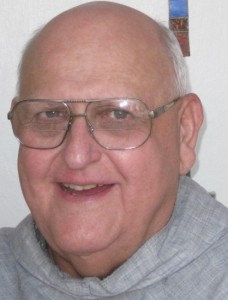 He was a scholar of theology, an amateur historian, and a self-taught canon lawyer, but Fr. Giles Carie, OFM Conv., was first and always a Conventual Franciscan Friar.

Born George Carie on January 25, 1935 in Vincennes, Indiana, to Urban and Helen (Bono) Carie, he died April 17, 2012, in Las Cruces New Mexico. He is survived by his brother Noel, of Memphis, Tennessee.

Fr. Giles is to be buried Monday, April 23, in the cemetery in Tortugas, New Mexico, among the graves of the native Tigua/Piro people whom he served for many years. In acknowledgement of his dedication, he was received as an honorary member of their tribe – The Indigenous Corporation of Our Lady of Guadalupe – which gives him the privilege of being buried in their ground. His profound interest and deep research into their lives and traditions resulted in his writing a history of the Tigua/Piro. 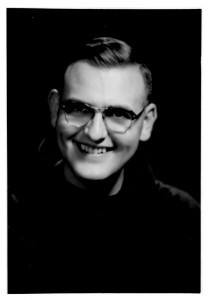 Fr. Giles entered the Conventual Franciscan Order in 1952 at Angola, Indiana. He made his solemn profession of vows in 1956. After four years of studies in Chaska, Minnesota, and Carey, Ohio, he finished his preparation for the priesthood at the Collegio Serafico St. Bonaventure in Rome, Italy. There he received two degrees in Sacred Theology and was ordained on March 18, 1961.

He returned to the U.S. and began serving in pastoral ministry, moving in 1964 to the southwestern U.S. where he was to spend most of the rest of his life. He served in parishes in New Mexico (Artesia, Lovington, Hobbs, Doña Ana, Carlsbad, and Tortugas) and in El Paso. He also served at the Holy Cross Retreat Center in Mesilla Park, NM, where he was living before his final illness.

In addition to his work in parishes, Fr. Giles served as a canon lawyer in the Dioceses of El Paso (TX) and Las Cruces (NM), and for the Archdiocese of Santa Fe (NM). Canon law was an interest he acquired while studying in Rome, and he read deeply into the law and commentaries. When he arrived in the southwest, there were few qualified canonists, so he began to practice while continuing to deepen his knowledge. Eventually, his briefs and other writings became known for their clear writing, precise logic, and rigorous argument.

Until his last illness curtailed his activities, he often could be found in the Las Cruces Marriage Tribunal offices spinning tales, telling jokes, and reflecting his love of local and regional history at the end of his typically busy days.

He oversaw the funding and construction of three parishes in the southwest. A fellow friar remarked that Fr. Giles was an effective administrator and was “not the type of person to be put off by opposition.”

Visitation will be at the Shrine of Our Lady of Guadalupe in Tortugas, NM, Sunday, April 22 2-8:30 pm. The address is 3600 Parroquia Street, Mesilla Park, NM 88047. Rosary at 4:30pm and a vigil service at 7 pm Sunday, with time to share memories of Fr. Giles. The funeral is Monday, April 23, 10 am, with burial in the Tortugas Cemetery. A luncheon will be served in the parish hall.

Donations may be made to the Holy Cross Chapel Fund, Holy Cross Retreat Center, 600 Holy Cross Rd.  Mesilla Park, NM 88047, or to the Province of Our Lady of Consolation, 101 St. Anthony Drive, Mount St. Francis, IN 47146. To make a donation in his memory, please click here.