St. Anthony was born in Lisbon, Portugal, at the end of the 12th century. He began his religious life as an Augustinian. But shortly after ordination to the priesthood, he met some Franciscan Friars who were returning from missionary work in northern Africa. Inspired by their zeal and courage, he transferred to the Franciscans to devote himself to preaching and spreading the faith among African peoples.

Those plans were thwarted; some might say by the inspiration of the Holy Spirit. He went instead to Italy, where he met St. Francis, and was discovered to have a superior talent for preaching and teaching. He became the first Friar to teach theology to the new members of the Franciscan order.

But it is as a missionary of God’s Word that he is most renowned. His sermons are memorable for their gentleness. But the strength of his preaching and the deep love of God they pronounced – Anthony’s love of God, and God’s overflowing, abiding love for each of us – turned around the lives of those who heard him. 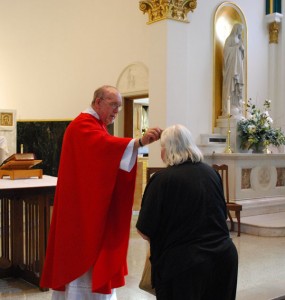 Fr. David touches the foreheads of people with a relic of St. Anthony.

In 1231 Anthony died in Padua, Italy. Devotion to him began shortly thereafter, as he was acknowledged as one of the spiritual giants of his age. Soon numbers of pilgrims came to visit his tomb in Padua. As they entered the basilica where he was buried, they went to the altar, where St. Anthony’s tomb lay underneath. They would place their hands, and then their foreheads on the tomb. Thus began the devotion of touching the forehead to a relic of St. Anthony, a practice that continues to our present day.

Anthony is a splendid example of “God drawing straight through crooked lines.” His life reminds us not to worry and to let God be God in our lives. God will make straight the crooked paths of our life, leading us to union and happiness with our eternal Father. 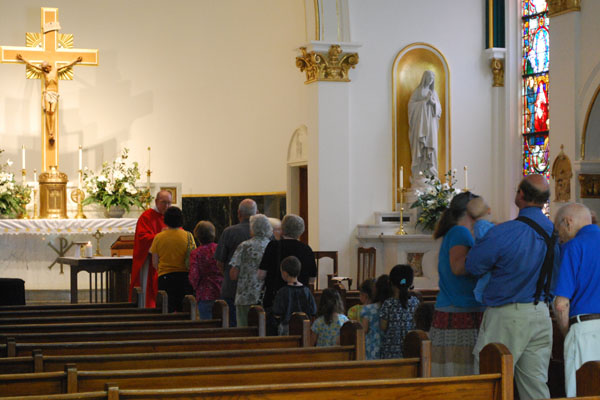