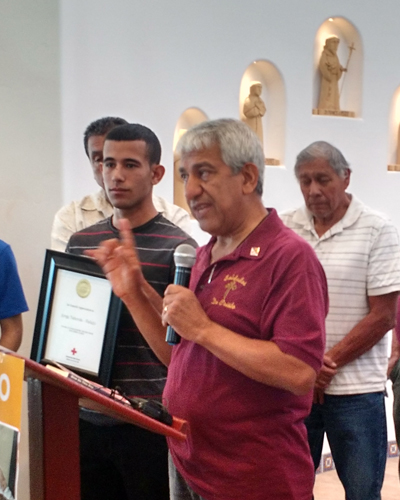 Jorge Taborda, whose wife was deported to Colombia, is trying to remain in the United States with his two sons. He and his wife have lived in the US for nearly 20 years, working, paying taxes, and raising their family. Jorge is staying with our Friars in New Mexico while trying to normalize his situation.

As the immigration issue continues to be debated in the United States Congress and in each of the 50 states, it is easy to be caught up in arguments and statistics.

But there are human faces in each case, and families hidden behind the stacks of numbers. As Christians, as Catholics, as followers of St. Francis of Assisi, we heed the words of Jesus Himself in the quote above, and answer the question He poses at the end of the story of the Good Samaritan: “Who was neighbor to the injured man on the side of the road?”

Below is a statement from one of the Friars of our Province, Fr. Tom Smith OFM Conv., Director of our retreat center in Mesilla Park, New Mexico. We affirm his words, support his actions, and pray that all involved will work to resolve this particular challenge.

And we pray fervently that there will be an overall resolution to the challenge of integrating all immigrants as we create a society where all of human life is cherished and protected.

Holy Cross Retreat Center is a ministry of the Conventual Franciscan Province of Our Lady of Consolation.

For many years as part of our mission statement, besides welcoming thousands of people each year for prayer and retreats, Holy Cross Retreat Center has offered a place to stay for people from out of town who are receiving medical treatment, occasionally for someone who needs a temporary stay, and in other special circumstances.   From mid-November till mid-January 2017, we also welcomed 67 adults and 77 children who were refugees from Guatemala, Honduras, and El Salvador.  They were victims of violence or extreme poverty and arrived with almost nothing.  With the help of five volunteers we provided a room, meals, clothes, toiletries, assistance arranging travel to family members, and a safe pleasant atmosphere.

As a Franciscan ministry, Holy Cross Retreat Center is called to offer hospitality to the most vulnerable among us and to those seeking a place of peace and prayerful serenity.  St. Francis of Assisi, the founder of our Order, left behind a comfortable life as the son of a wealthy merchant to live the Gospel as a poor man and to serve the poor personally.  He also showed compassion in caring for the lepers, those most alienated by society in his time.

The Old Testament speaks of immigrants 92 times and the New Testament says, “Do not forget to show hospitality to strangers, for by so doing some people have shown hospitality to angels without knowing it” (Hebrews 13:2 NIV)  The actions of Jesus were grounded in his faith and he often reached out to the sick and the hungry and those alienated because they were from a different region.  Jesus alsogave us the example of the Good Samaritan who cared for the man left along the road by robbers without asking where he was from or even who he was, providing him with healing and hospitality.

Pope Francis encourages us to reach out to those on the margins and to show mercy.  He has appealed for the needs of the refugees at Lampedusa, and provided housing, food, and a welcome to the homeless people in the area of the Vatican,  He reminds us of the dignity of each person  and how God calls us to extend our hearts to those in need.

We are proud to offer Franciscan hospitality to Jorge while he fights to stay united with his two sons.  As we have welcomed many others, we welcome Jorge to have a place of comfort, support, and peace.  It is our faith tradition and our desire to offer hospitality in his time of need, and to call for respect and the unity and dignity of families.   The Catholic Bishops of the United States published a pastoral letter entitled “Strangers No Longer” promoting respect for immigrants, and many statements since then calling for immigration reform and ministry to those affected by the struggles.  I would like to thank Bishop Cantu for his presence and the support of the Diocese of Las Cruces.  We encourage other Catholic institutions and communities to extend hospitality and their prayerful support to those on the margins.