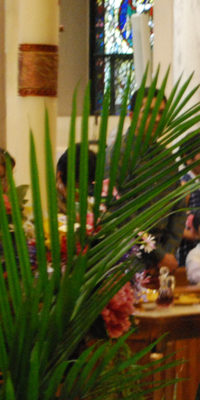 A Reflection by Fr. John Curran for Passion Sunday

The composer of the most famous Christian hymn, “Amazing Grace,” John Newton, was less than 20 when he became a successful captain of British slave ships. He was also notorious for his immoral life style. Later as an Anglican priest he would call himself the “old African Blasphemer.” Many times his life was in danger, but he refused to ask God for help. Finally he was converted to Christ on March 21, 1747, as the Greyhound was sinking during a violent storm. He called out to God to save the ship. Later as an Anglican priest in England, he said that only God’s amazing grace had saved “a wretch like me.”

God sent prophets like Isaiah to convert hardened sinners. They were like John Newton. The hardened sinners refused God’s grace and “set their hearts” to rebel against God. The sinners made their faces harder than a rock. (Jer 5: 3-4 and Zech 7:11-13)

Jesus was tough, because he was clear about his mission, and he faced opposition with courage. He moved toward his goal with unwavering firmness. Like Isaiah he “set his face like a flint.” (Is 50:7 and Lk 9:51) Finally from the cross Jesus declared that he had completed his mission. “It is finished.” Jn 19, 30 (See Jn 17,4)

A religion teacher explained to her children that the crowds welcomed Jesus as their king and they waved palm branches. At church the people will be given palm branches to remember this day.

A little girl asked her teacher, “Are the branches free?” During Holy Week let’s follow Jesus on his path to Calvary. Jesus said “yes” over and over. He did the things that hurt him. Jesus is a tough man. His sacrifice was because of his love. It was free.