Fr. Wayne Hellmann, OFM Conv., will give the Last Lecture Wednesday, April 30th, at 7:00 p.m. in the Saint Louis Room of the Busch Student Center. All are welcome to attend.

If you were ever invited to deliver a ‘Last Lecture’, what would you say? 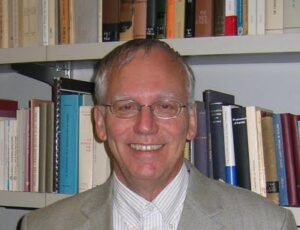 For forty years Fr. Wayne Hellmann, OFM Conv. has served in the Department of Theology at Saint Louis University. He has taught thousands of undergraduate and graduate students, directed dissertations, engaged in theological and historical research into the Franciscan tradition, and served in administration.

This Spring he was nominated by students from across the university to deliver this year’s Last Lecture on April 30th. It is an invitation to share reflections from his life’s journey and speak to students as if it were his last lecture ever.

While academic work as a university professor might not seem to be a typical Franciscan ministry, the Order has a rich scholarly tradition, going back to Saints Anthony and Bonaventure. Friars from our Province helped found Bellarmine College (now University) in Louisville, Kentucky.

Upon hearing of this honor given to him, Father Wayne said, “This is the most precious of any academic honor I have ever received. This one comes directly from students. They are the love of my life.”

Originally from Terre Haute, Indiana, where Conventual Friars staffed his home parish, Fr. Wayne attended minor seminary at Mount St. Francis, Indiana. He professed Solemn Vows in 1963 and was ordained in 1967. In addition to his work at Saint Louis University, he served as Minister Provincial from 1988 to 1994.

Current Minister Provincial Fr. Jim Kent, OFM Conv. said, “Although he has a great reputation as a scholar and teacher, Fr. Wayne is known more for his heart than his head.”