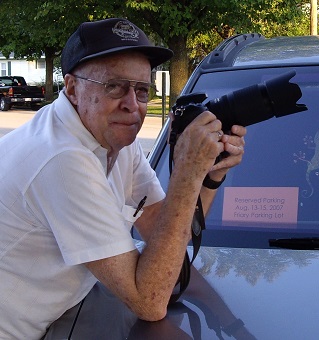 Br. Bryan Hoban looked at God’s creation from a different perspective, seeing things that other people missed. It’s what made him a great photographer, capturing people and events with clarity and grace. It was also part of his identity as a Conventual Franciscan Friar, seeing past the surface and identifying the essential – who someone was, what someone needed.

That perspective was love. It was his response to the call of Jesus, following in the path of St. Francis of Assisi.

Friar Bryan Hoban, OFM Conv. died April 18, 2015 in Findlay, OH. He was born James Carlos Hoban on May 2, 1931 in Louisville, KY, to Leo and Mary Sheila (Poole) Hoban. He professed Simple Vows as a Conventual Franciscan Friar on July 4, 1950, and Solemn Vows on July 4, 1953 in Chaska, MN. He was predeceased by his parents, and his brothers Leo and Michael.

Choosing to become of Franciscan Brother rather than seeking priestly ordination, he first worked on the Province farm, raising prize-winning cattle. Later he edited the Province publication The Companion, earning awards for design and writing. In 1965 Br. Bryan was sent to Zambia as a missionary. He served in Zambia for more than 20 years, designing and constructing schools and other needed buildings, finding ways to supplement the local diet, facilitating relief for refugees, and helping in the formation of what is now the Zambian Conventual Franciscan Province.

During the years of war in Zimbabwe and Rhodesia, thousands of refugees, mostly young boys, poured into Zambia. Along with Br. Tony Droll, OFM Conv., Br. Bryan set up a camp for the boys, providing shelter and food – the essentials. But Br. Bryan looked into the sad eyes surrounding him, and saw the deeper need. Rigging up a large makeshift screen, they figured out a way to show cartoons to the boys. The result was laughter, and eyes that were no longer so sad.

After returning to the United States, Br. Bryan worked in the Franciscan Mission Association office in Carey, Ohio. There he maintained contact with the hundreds of people who supported the mission activities of the Conventual Friars of the Province of Our Lady of Consolation.

In his years in Carey, he was known best as a photographer/videographer. It was difficult to find good pictures of Br. Bryan, because he was almost always behind the camera himself. His photos of the Basilica and National Shrine of Our Lady of Consolation are well known, and cherished by those who have copies of them.

A funeral Mass for Br. Bryan took place Wednesday, April 22, at the Basilica of Our Lady of Consolation in Carey, OH. A Mass of Christian Burial took place on Friday, April 24,  at the Chapel at Mount St. Francis, IN, followed by interment in the Friars’ cemetery. Memorial gifts may be made to the Franciscan Mission Association, 322 West Street, Carey, OH 43316 or by clicking here.