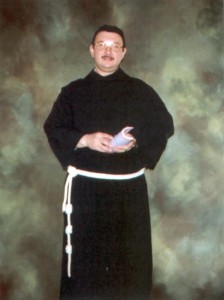 Friar Mark Cucci passed away on May 3, 2012. He was 71. Born Carmen Cucci, he is predeceased by his parents and survived by his sister, Mary Therese Cucci.

Br. Mark was born on September 17, the day commemorating the Stigmata of St. Francis of Assisi, when the founder of the Franciscan Order received the five wounds of Christ. This sign of literal compassion, or shared suffering, was a testament to Francis’ closeness to Christ.

A parallel can be seen in Br. Mark’s life. Remembered as very cheerful and outgoing, he embodied the Franciscan commitment to the poor while serving in St. Louis, Missouri, and at Mount St. Francis, Indiana. During his years at the Mount this commitment took the form of working at the Franciscan Shelter House and repairing old bicycles he gave away to the poor. 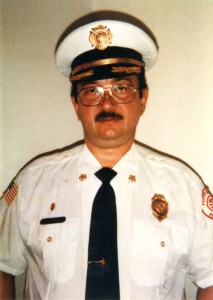 He was also a committed volunteer fireman, helping in the work of firefighting while bringing Franciscan joy to public servants whose lives can be dangerous and sometimes discouraging. He was proud of the small fire truck he maintained at the Mount, giving Mount St. Francis its own fire department.

After working in parishes in Lansing, Michigan, and Indianapolis, Indiana, Br. Mark served as administrator of the retreat center at Mount St. Francis. It was at that time that he realized his aging parents needed his assistance. So he returned to his native Chicago, realizing that as a Franciscan his ministry now would be one of compassion, as caregiver for family and friends in the Evergreen Park area. In addition, he stayed involved with groups of Secular Franciscans, guiding them in their efforts to live in the footsteps of Francis.

Over the past two years, Br. Mark entered his own time of suffering, with various illnesses that led to his death.

But he is remembered most for his kindness to all he met, those who would see him at a distance and shout “Brother Mark! Brother Mark!”

Donations may be made in his memory to The Province of Our Lady of Consolation, 101 St. Anthony Drive, Mount St. Francis, IN 47146 or to make a donation online, please click here.