In 1979 I was asked to help in our Conventual Franciscan mission in Honduras. Long on enthusiasm, but short on everything else, I found myself in what was to be St. Max Kolbe Parish, one of the poorest parts of the capital city of the second poorest country in Latin America. The culture was very different from what I was used to; this was sometimes delightful and sometimes nerve-racking. But I developed a deep affection for the people and a desire to help. When I was asked to move to El Salvador in 1996, I found it hard to leave.

Last year, 15 years later, I was assigned to St. Joseph’s University Parish in Terre Haute, Indiana, which has had a special relationship with Kolbe Parish since 1999. The two parishes had grown into a “twinning” relationship where every year a team of SJUP folks were missioned to Kolbe Parish for a week or so to get to know the people better and to work on medical, construction, and educational projects. Kolbe Parish friars come to visit here as often as possible, and once sent us a beautiful processional cross. SJUP gives 2% of its collections to the sister parish. When, with my background, I was sent to SJUP, it had to be the work of Divine Providence. 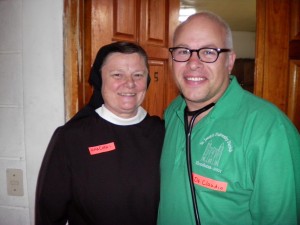 This year’s mission trip (Oct. 18-26) came together providentially too. My old friend Sr. Cheryl, a Franciscan Sister of Perpetual Adoration who used to work close by our Friars on what is called the “Hill of Sores,” wanted to go along. She recruited a couple of young, smart doctors, because no Terre Haute doctors were able to join us this year. The doctors were assisted in Honduras by local Dr. Yolanda. Tammy Boland and Brian Voges did triage. Joe Tenerelli, Cookie Dooley, Willy Scully, and Marcia Lane-McGee handled the “pharmacy” part of the mission. Sr. Cheryl, Patricia Polastri, and I were able to do necessary translation with the help of some fine young Honduran translators: Cecil, Armando, and Jaquilyn. 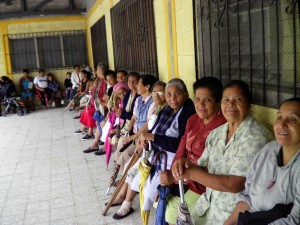 Friar Isidoro had already bought a lot of medical supplies. On our first day we bought more supplies at a local pharmacy and had to buy more on two other occasions. We spent around $4,000 on medicines. During the first three days we received nearly 300 patients in the parish center. Later we helped patients in four outlying areas of the parish. Their concerns varied from various aches and pains to more serious illnesses to seeking vitamins and medications that they could not find or afford. The local friars gave them admission tickets beforehand, with the idea of being able to keep contact with them. The most important thing we did was care for the people and share the love of Christ.

On the last day of our medical mission we had an interesting evaluation with the Kolbe friars. Friar Isidoro spoke for the Kolbe parish team when he said that the SJUP team had exceeded all his expectations. But there were a number of things we need to work toward: a “Health Promoter” in each of the parish communities, the incorporation of eye health in the mission, a more detailed patient intake form and ongoing patient chart, a patient data base, water purification equipment, and so forth.

We're looking forward to doing another SJUP medical mission to Kolbe parish in Honduras in October of 2012. Would you like to go with us?