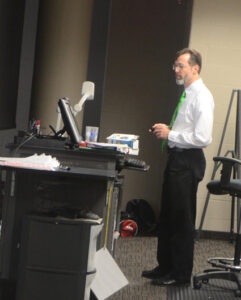 Engaging Students as Jesus Would

Jesus was a teacher. People even called him Rabbi, the Hebrew word for teacher. But what kind of classroom teacher would Jesus be?

As he begins his second year as Assistant Professor at the University of Louisville School of Nursing, Br. Paul Clark, OFM Conv., Ph.D., RN looks to the Gospel for guidance on working with his students.

“There’s an old Franciscan saying – Preach the Gospel at all times; use words if you must,” Br. Paul said. “I try to engage people as Jesus did, just like with Zacchaeus who was up in the tree trying to see Him. Jesus looked him in the eye and spoke to him, engaging him as a person, not just as a number.

“Jesus treated everyone with kindness, humanity, and respect – even when he spoke to Judas at the Last Supper it was with love. I try to model that Gospel behavior, to do the same type of thing with students – make eye contact, treat them with kindness and respect, like colleagues.”

While teaching has always been an important Franciscan ministry, that’s not how Br. Paul started out. He wanted to be a nurse practitioner, working with patients in hospitals and helping other Friars in his community. But while he was working as a nurse in the Emergency Department, two of his mentors pushed him toward the classroom.

“I thought: I don’t want to teach; I want to practice as a nurse,” he said. “But their comments stayed with me, and I began to pray about it. I even did something I wouldn’t normally do – I prayed for a sign.”

One morning during a retreat, the Retreat Director told him about a priest who was serving a small community. The people this priest was serving told him he needed to teach others what he was doing, then instead of one person, there could be 20 or 30 or 50 helping people in the same way.

“I thought to myself, ‘Is this the sign?’” he said. “I kept praying about it and knew it was something to pay attention to. So, I entered a Ph.D. in nursing program that would allow me to teach. Even during my doctoral studies, several times along the way I asked myself: Why am I doing this?”

Br. Paul also follows the example of St. Francis, who in his later years would have preferred to stay in his cave and pray, almost like a monk. 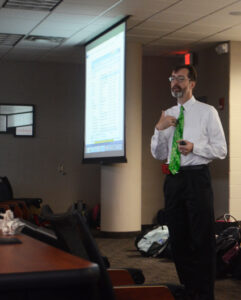 “But very clearly God moved him out, led him to be with the people,” Br. Paul said. “In teaching you can get locked in an office, away from people, preparing for classes and working on research projects. But I feel God moving me to be around the students, trying to figure out what I can do for them, engage with them to get them what they need. I want them involved in the process of learning.

“I believe that’s why God wanted me to be in this. I’m perfectly happy with the decision. There’s a satisfaction with what I’m doing. Sometimes I look at a nurse practitioner and think that would be an enjoyable way to practice nursing, but I’m very happy with what I am doing as a nursing professor – passing along nursing knowledge to future nurses.”

After a recent exam he had given to students, he was overheard asking his students how he could help them do better.

“There could be a test question I thought was great, but was frustrating for the students because it wasn’t clear to them,” he said. “I can’t help them if they weren’t prepared – that’s their responsibility. But I can help fix the style of questions that leave the student confused. It’s not about tripping people up. It’s about helping them learn.