Here are some examples of the type of grassroots organizations The Fund partners with:

The Missionary Franciscan Brothers of Sri Lanka are doing their part in helping their country recover from a long and brutal civil war fueled by ethnic and religious differences. As one of their ministries they have developed a Montesorri School in Chilaw, Sri Lanka to serve the children of the poor. Open to all, this new initiative welcomes children from many different ethnic, religious and language groups into an environment that is creative and conducive to learning. Beginning with the youngest, the Franciscan brothers hope to begin laying the foundations for a new society that will be built on mutual respect, co-operation, and peace. This certainly was the prayer and hope of Pope Francis for Sri Lanka when he visited the Island nation last year.

It is with pride and joy that we report that through a grant from The St. Francis Fund they have now completed an important phase in creating this school environment – a playground! Now these little ones have a safe place outside where they can run, play, and interact. These are surely ways in which peace and cooperation are learned. The play area is secured by a new fence and filled with swing sets and jungle gyms. In addition to this, new restroom facilities have been added on to the school building.

Along with these new amenities the brothers have hired two new teachers who are trained in creative play. The collaboration with parents has also been improved as they are essential in helping to create a climate of love and learning. As a part of their curriculum they have also created a small band where the children learn to make a joyful sound to God together. 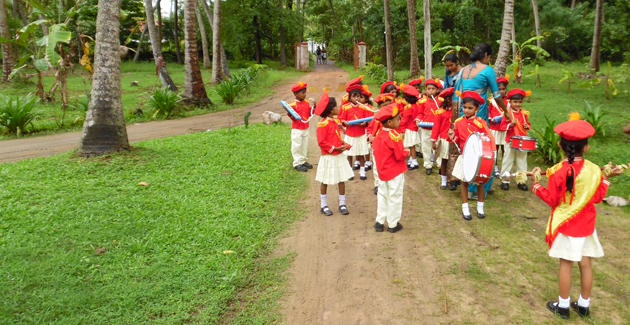 The Missionary Brothers are most thankful to the friars of Our Lady of Consolation for their support of this initiative. They write: ‘Without your assistance we never ever could have updated this worthy project.” Indeed we are proud to be collaborators in this beautiful playground for peace and reconciliation.

The Social Justice Fund is supported by Friars around the Province, who contribute to a fund to help groups working with poor and marginalized people. Applications are submitted by groups, and the money disbursed by the Our Lady of Consolation Province's Commission on Peace, Justice, and the Safeguarding of Creation.

From time to time, we will highlight groups that have received funding. We begin with Water With Blessings, headquartered in Louisville, Kentucky.

Like many great ideas, it began with something basic: the practical desire to provide healthy water to a small group of people. And like in any great story, there are many twists and turns on the way to success.

Architect Jim Burris, hospital engineer Arnie LeMay, and Ursuline Sister Larraine Lauter were veterans of medical mission trips, tiring of treating the same water-borne illnesses year after year. Feelings of helplessness began to creep in; instead of treating the root problem of dirty water, they were merely treating the symptoms.

After finding a simple solution to a seemingly complex problem, the trio founded Water With Blessings.

“We learned a lot about why subsidiarity is such a powerful idea,” Sr. Larraine said. “If you must wisely invest resources, go to the mothers. They are the people who will sustain an effort. They are conscientious.”

“You need to empower compassion,” she said. “That’s the base underneath the program. When we equip and empower women for a ministry, we can bring about leadership. Men then become the supporters and collaborators.”

Armed with a simple, plastic, backwash-able water filters (based on the operation of a dialysis machine) and five-gallon plastic buckets, the Water With Blessings developed a training guide and went to work. Then on the second day of training, the program took on its true direction and identity.

“On that second day, one hour in, we handed the session over to one of the women there,” Sr. Larraine said. “By empowering the women to be teachers, letting them develop the curriculum further, it really began to move forward.

“If you just distribute materials, if you just teach top-down, there is no local leadership. Then when you leave, it implodes.

Now, it is the women who go out on their own, in brigades of Water Women, discerning their next moves, and where to take the program. The work has now spread to 14 countries.

“We have a big focus on prayer and community,” she said. “We all pray together at 1 pm, no matter where we are. We set the alarms on our phones, and in our offices, across the country and in Honduras and other places.

“And there is a God spark in the work. If you give the filter to a woman, she will take it home and guard it, afraid that it might be stolen. If you say, ‘In solidarity, will you share this with others?’ perhaps she will for a few weeks. But if you say, ‘Will you be like the woman at the well, will you serve as a Water Woman?’ women will fly with that. We need to keep finding women who have the God spark.”