Thanks to the donations of time and treasure from several benefactors, a beautiful new patio stone walkway now graces the outdoor Stations of the Cross at Franciscan Retreats and Spirituality Center in Prior Lake, MN.. Retreatants may exit the St. Francis wing of the Retreat Center and walk this beautiful and stable pathway as they pray the Stations. The new walkway will afford greater comfort those retreatants who are physically challenged.

Several years ago, one of our retreatants asked if there were any plans for the Outdoor Stations. Many ideas were considered, and the Stations were  re-located to their current position on the retreat center grounds. It was decided a stable path was needed by the Stations and bids were considered in the Spring of this year.

Despite the fact that we picked the hottest four days in July to do this project, the project was completed with no casualties in five days. Special thanks are in order to Val Zweber, Connor, Klugherz, Jerry Simon, Paul Berry, Jim Pint, Bob Beck and Julius Friedges. Further plans include landscaping and benches at points along the path for retreatants to sit and meditate

Bob Beck, the Director of Marketing and Operations at Franciscan Retreats and Spirituality Center has initiated many overtures to the local community since he began in October of 2012. Bob regularly attends the Prior Lake Chamber of Commerce Meetings which helps raise the profile of the Retreat Center. Bob Roddy accompanied Bob to an event in June in Shakopee, where not for profit organizations were featured. 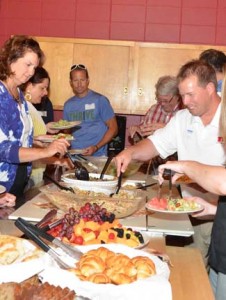 On July 17th, the Retreat Center hosted the Chamber for its monthly lunch meeting. Nearly 62 people from various businesses and organizations in the community attended the luncheon. Dr. Steve Schier, OFS, a member of our local OFS Fraternity, Jim Van Dorn, and Corrine Kindschy, one of our staff members, offered to tours of the facility. 85% of those attending the luncheon had never been to the retreat center.

They were wowed by Judy Miller’s meal, the beauty of the grounds, and the serenity of the Chapel. ‘I have always wanted to drive back here to see what this place is all about,’ was a common comment. 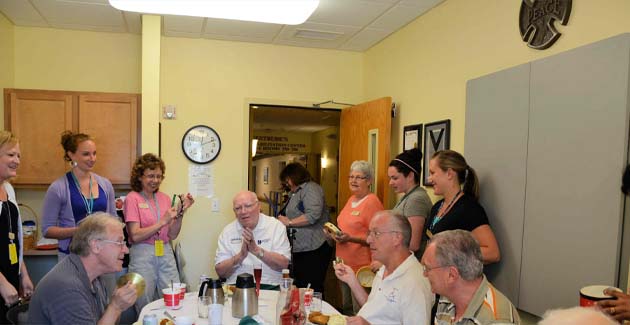