When Our Lady appeared to Saint Juan Diego, her face was that of a woman of mixed blood, a mestiza, and her garments bore many symbols of the native culture. Like Jesus, Mary is close to all her sons and daughters; as a concerned mother, she accompanies them on their way through life. She shares all the joys and hopes, the sorrows and troubles of God’s People, which is made up of men and women of every race and nation. 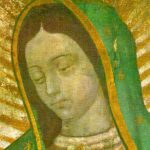 When the image of the Virgin appeared on the tilma of Juan Diego, it was the prophecy of an embrace: Mary’s embrace of all the peoples of the vast expanses of America – the peoples who already lived there, and those who were yet to come.

Mary’s embrace showed what America – North and South – is called to be: a land where different peoples come together; a land prepared to accept human life at every stage, from the mother’s womb to old age; a land which welcomes immigrants, and the poor and the marginalized, in every age. A land of generosity.

That is the message of Our Lady of Guadalupe, and it is also my message, the message of the Church. I ask all the people of the Americas to open wide their arms, like the Virgin, with love and tenderness.

Pope Francis
The Feast of Our Lady of Guadalupe
December 12, 2013

Across Central America, many children grow up in the midst of intense poverty and gang violence. Some end up orphans, on the streets with no one to provide for them or even give them a place to live.

Some begin to migrate north, eventually ending up in the southern United States and in the hands of immigration officials. As minors, they are sent to youth detention centers, but have to leave those when they turn 18. Because they have no families, and with nowhere else to send them, immigration and law enforcement officials seek assistance in housing and caring for them.

Posada Guadalupe, a shelter the Province sponsors in San Antonio, Texas, is a place these young people can stay from a few months to more than a year while they go through the process of acquiring legal status through the Immigration court.

We have recently received several new residents at Posada Guadalupe.

Hilario and José both came to us by way of University Hospital two weeks ago.  Hilario suffered a severe wound to his right foot when a fork lift ran over it.  He spent over a month in the hospital, undergoing a couple surgeries and physical therapy.  José had the misfortune of falling off a ladder while working on the construction of a house.  He broke his leg in two places, and, like Hilario, needed surgery. 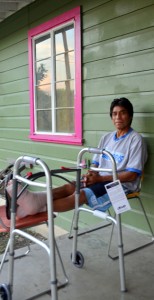 Both of these men will be with us for at least a few months due to the severity of their injuries, and will need several follow up appointments.

On a more positive note, in the past two weeks, four of our younger residents received their U.S. residency:  Edwin from Honduras; Mario, from Mexico; Emerson, from El Salvador and José from Mexico.  For a couple of these young men the wait has been a year or more, for the others it has been a mere few months.  They are now free to work legally and pursue their dreams of making a better life for themselves and their families in their countries of origin.