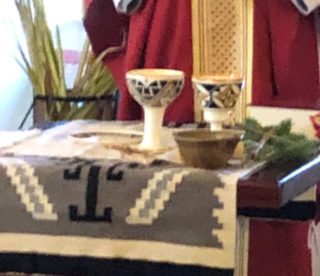 Friar Fr. Charles McCarthy OFM Conv. is serving in the southwest, working with the OFM Friars in and around Albuquerque, New Mexico.

Fr. Charles' Palm Sunday began with a 7:30am Liturgy at Santo Domingo Pueblo. The Native American people living there traditionally use a pine cross on that day.

Then he celebrated a 9:30am Liturgy at San Felipe Pueblo. This Pueblo is known for its passion for preserving traditional customs and values.

At 1pm, he led a Palm Sunday Mass in the lobby of an Albuquerque hotel where a group of immigrants are staying after being released from ICE custody. (You can read more about this in the Albuquerque Journal.)

The palm crosses were made by the asylum seekers. The lighter colored palm strips came from St. Therese of Lisieux Catholic Church, while the dark green variety came from St. Andrew's Presbyterian Church.

The Church is universal. Let us join in prayer in Jesus' name.  Amen. 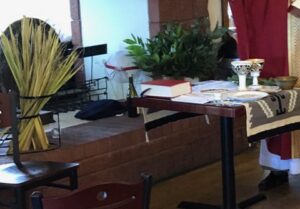 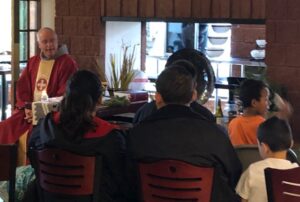