2. The great danger in today’s world, pervaded as it is by consumerism, is the desolation and anguish born of a complacent yet covetous heart, the feverish pursuit of frivolous pleasures, and a blunted conscience. Whenever our interior life becomes caught up in its own interests and concerns, there is no longer room for others, no place for the poor. God’s voice is no longer heard, the quiet joy of his love is no longer felt, and the desire to do good fades. This is a very real danger for believers too. Many fall prey to it, and end up resentful, angry and listless. That is no way to live a dignified and fulfilled life; it is not God’s will for us, nor is it the life in the Spirit which has its source in the heart of the risen Christ.

3. I invite all Christians, everywhere, at this very moment, to a renewed personal encounter with Jesus Christ, or at least an openness to letting him encounter them; I ask all of you to do this unfailingly each day. 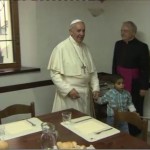 4. ...This is the joy which we experience daily, amid the little things of life, as a response to the loving invitation of God our Father: “My child, treat yourself well, according to your means… Do not deprive yourself of the day’s enjoyment” (Sir 14:11, 14). What tender paternal love echoes in these words!

6. ...Joy adapts and changes, but it always endures, even as a flicker of light born of our personal certainty that, when everything is said and done, we are infinitely loved.

7. ...I can say that the most beautiful and natural expressions of joy which I have seen in my life were in poor people who had little to hold on to. I also think of the real joy shown by others who, even amid pressing professional obligations, were able to preserve, in detachment and simplicity, a heart full of faith. In their own way, all these instances of joy flow from the infinite love of God, who has revealed himself to us in Jesus Christ. I never tire of repeating those words of Benedict XVI which take us to the very heart of the Gospel: “Being a Christian is not the result of an ethical choice or a lofty idea, but the encounter with an event, a person, which gives life a new horizon and a decisive direction”.[3]

A Mother with an Open Heart: 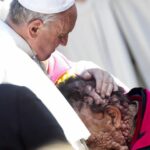 46. A Church which “goes forth” is a Church whose doors are open. Going out to others in order to reach the fringes of humanity does not mean rushing out aimlessly into the world. Often it is better simply to slow down, to put aside our eagerness in order to see and listen to others, to stop rushing from one thing to another and to remain with someone who has faltered along the way. At times we have to be like the father of the prodigal son, who always keeps his door open so that when the son returns, he can readily pass through it.

No to a Sterile Pessimism:

85. One of the more serious temptations which stifles boldness and zeal is a defeatism which turns us into querulous and disillusioned pessimists, “sourpusses”. Nobody can go off to battle unless he is fully convinced of victory beforehand. If we start without confidence, we have already lost half the battle and we bury our talents. While painfully aware of our own frailties, we have to march on without giving in, keeping in mind what the Lord said to Saint Paul: “My grace is sufficient for you, for my power is made perfect in weakness” (2 Cor 12:9). Christian triumph is always a cross, yet a cross which is at the same time a victorious banner borne with aggressive tenderness against the assaults of evil. The evil spirit of defeatism is brother to the temptation to separate, before its time, the wheat from the weeds; it is the fruit of an anxious and self-centred lack of trust.

The Special Place of the Poor in God's People 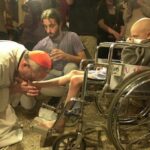 197. God’s heart has a special place for the poor, so much so that he himself “became poor” (2 Cor 8:9). The entire history of our redemption is marked by the presence of the poor. Salvation came to us from the “yes” uttered by a lowly maiden from a small town on the fringes of a great empire. The Saviour was born in a manger, in the midst of animals, like children of poor families; he was presented at the Temple along with two turtledoves, the offering made by those who could not afford a lamb (cf. Lk 2:24; Lev 5:7); he was raised in a home of ordinary workers and worked with his own hands to earn his bread. When he began to preach the Kingdom, crowds of the dispossessed followed him, illustrating his words: “The Spirit of the Lord is upon me, because he has anointed me to preach good news to the poor” (Lk 4:18). He assured those burdened by sorrow and crushed by poverty that God has a special place for them in his heart: “Blessed are you poor, yours is the kingdom of God” (Lk 6:20); he made himself one of them: “I was hungry and you gave me food to eat”, and he taught them that mercy towards all of these is the key to heaven (cf. Mt 25:5ff.).

For the entire document - Evangelii Gaudium