Anniversaries are appropriate times for new beginnings, and so, as we begin our seventh year, I thought it would be appropriate to start a newsletter.

It was six years ago this October that we opened the doors to our first residents.  One was a man from Mexico who was sick with diabetes, the other was a man from Guatemala who was injured in an auto accident.  They both remained with us for about two months, before moving on, just before Christmas.

After their departure we had no one for about five weeks.  I wondered if it was time to close up shop, until, out of the blue, I received a call from Austin, asking if we could take a man who needed dialysis.  We took him, and since that day, we have not been without residents.

Early on, we took only people who were sick or injured, usually referred to us by one of the local hospitals, men for the most part, but we have housed a few women, too.  After about two years, we were getting calls from RAICES, a group of immigration lawyers, asking us to take in their clients who had aged out of the detention centers for unaccompanied minors.  Now, these young people make up the majority of our residents.

Who Are These Young People? 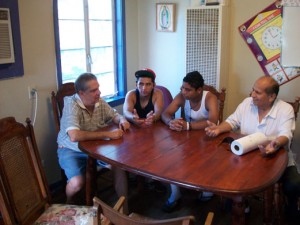 It is this group that presents us the major challenge. Teenagers in general require a lot of attention, but those who come to us, come with lots of emotional baggage.  Most of these kids leave home to escape the dire poverty they live in, domestic violence or gangs, or all of the above.  Frequently they have been abandoned, abused or neglected by their parents, and have a very hard time trusting anyone.  Besides all of this, or because of it, they tend to have a very low self-esteem.

These youth stay with us anywhere from a few months to more than a year, while they go through the process of acquiring legal status through the Immigration court.  (It is to a minor’s advantage to be arrested by the Border Patrol, because if he or she can demonstrate abuse, abandonment or neglect by at least one parent while still a minor, she or he can apply for legal status).

It is interesting to observe how, having left home in Honduras, for example, at the ripe old age of thirteen or fourteen, risking their lives as they cross Mexico, they end up at our shelter, and, once they get their documents, they are often afraid to take the next step of going out and finding an apartment, to begin life on their own.  What would be an easy step for us in the United States, frequently proves to be the most frightening step for our kids.

As one might imagine, this is not an easy ministry. Each resident has his own way of doing things, or, as is more often the case, of not doing things.  We have to be on top of them constantly to keep the house clean. I’m reminded of what Dorothy Day said about working with the poor:  “Life itself is a haphazard, untidy, messy affair.”  I’m also reminded of what Mother Teresa of Calcutta said:  “Love until it hurts.”

And, to be sure, it does often hurt.  How can it not hurt when a young man tells you his father used to tie him up and then beat him. Others tell us they don’t know who their father is.  Or when a young mother says she feels guilty eating what we serve in the shelter, knowing that her six children in El Salvador are hungry.  None of this is made up.  Stories of this nature are not the exception, they are the norm.  Nobody wants to leave their homeland.  But when life is so difficult, so violent, so seemingly without hope, we begin to understand how a child is able to make the decision to leave home and strike out on his/her own, heading to the United States, even though the odds of making it alive are not great. 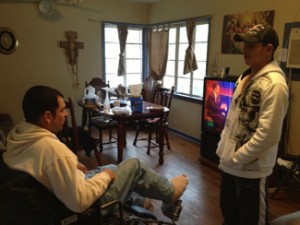 Having mentioned all this, one might conclude that the young people at the Posada are on the fast track to failure.  However, we have had a number of success stories.  Five or six of our young men have gone to work for La Michoacana, a meat market that has agreed to employ anyone we send them, as long as their documents are in order.  Others have found employment on their own.  One has just recently been accepted by Job Corps. Some have chosen to remain in San Antonio, while others have opted to go elsewhere in the country.  We currently have three living with us who go to local high schools. The good thing is that, little by little, they all become independent.

We are very much aware that some people think this work is “un-American,” but proclaiming the Gospel is a ministry without boundaries.  We feel obliged to be faithful to Christ. We see our ministry to these people as a call from God to serve them, to wash their feet, so to speak.

How You Can  Help

People frequently ask us what our needs are. Of course, money is necessary, but an even greater necessity at this point is personnel.  We need men and women with an open mind and heart who can give a few hours a week to befriend the residents, to mentor them, take them out for a hamburger, cooking a meal at the house or simply watching TV with them, in short, demonstrating to them that you care about them.

Another need we have at this time is someone who would be willing to volunteer some time to develop a web page for us.  If somebody out there has that talent, it would be a great help to us, and it could be done without even leaving home.