On Saturday, August 16, the Formation Community of San Damiano in San Antonio, Texas, formally accepted Jaime Zaragoza as a Postulant for the Province of Our Lady of Consolation. With the reception of the Tau Cross, the symbol of the Franciscan Order, and the embrace of the community, Jaime begins a two-year journey of exploration with the Conventual Franciscans. Jaime joins Jacob Minjarez (2nd year Postulant) and Friars Ian Bremar and Don Bassana (post-novitiate students), as well as the local friars. 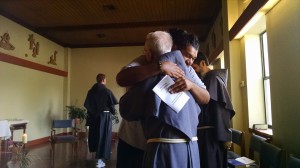 Jaime Zaragoza is a twenty-six year old young man from El Paso, Texas. He comes from a very faithful family (his father was recently ordained as a deacon) and has grown closer and closer to his Church in recent years. Jaime played college football for a year at Sul Ross State U., but then left school to work as a cook at a country club and also as a volunteer cook for a homeless shelter. Jaime first met the friars at Our Lady of Mt. Carmel Parish in El Paso.

Please keep Jaime in your prayers, as well as all who are discerning religious vocations.