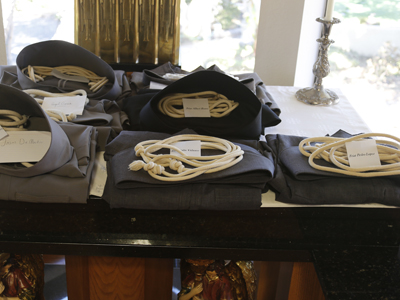 Between 1841 and 1869, more than a quarter million people set out for California, seeking land, gold, and adventure.

This summer of 2016, seven men arrived in Arroyo Grande, California, searching for a different treasure: the Pearl of Great Price. On July 20, they were invested in the Conventual Franciscan habit and professed first, or simple, vows, beginning their year as Franciscan novices. This first step in their journey toward full Franciscan discipleship will be followed over the next few years with other training and education, but this experience will be the foundation of all that follows.

As part of these first steps, I was invited by Fr. Giles Zakowicz, OFM Conv., the Novice Director, and Fr. Maurice Richard, OFM Conv., the Assistant Director, to direct the men on a retreat focused on the parable of the “Prodigal Son.” As with the young man’s return to his father in the parable, each of the novices was challenged with the idea of “conversion of life,” reflecting on and preparing for the decision making that takes place when preparing for the vowed life of a Catholic religious.

We concluded the retreat with by pondering the devotion promoted by Pope Francis: “Mary, the Undoer of Knots.” This seemed especially fitting during this Holy Year of Mercy.

Please join me in keeping the Conventual Franciscan Novices in our prayers.