On Thursday July 23, 2015, seven men expressed their desire to live for a year as Conventual Franciscan Novices and received the Franciscan habit. The investiture ceremony took place in the St. Francis of Assisi Novitiate Chapel in Mishawaka, Indiana. 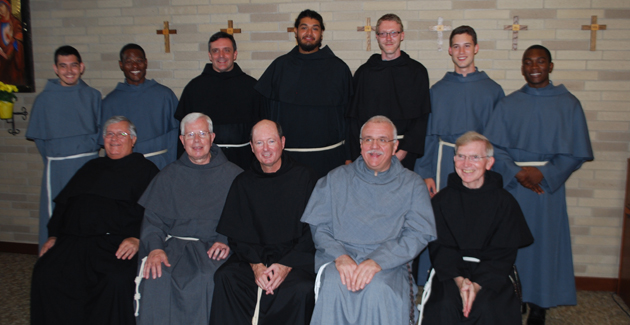 Two of the Novices, Jacob Minjarez (far left in the back row) and Jaime Zaragoza (middle in the back row), are members of the Province of Our Lady of Consolation. The other four are Brian Tougher, Roberson Lubin, Marco Didden, Timothy Blanchard, and Franck Lino Sokpolie.

During the Novitiate year the men will live in community, study Franciscan history and the Franciscan way of life, and, after a year of discernment, decide whether they will take their Simple (or first) Vows as Franciscan Friars.

Please keep these men in your prayers as they take their first steps as followers of St. Francis of Assisi.