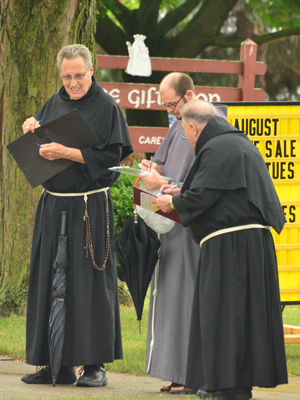 (Ed. Note: May 1st, the Feast of St. Joseph the Worker, was the inaugural Religious Brothers Day. If you didn't get a chance on the 1st, today is a great time to say thank you to the Brothers in your life!)

And the Lord gave me brothers…St. Francis

When I tell people I'm a Franciscan brother, one of the responses I often hear is, “So what does a brother do?” Usually I smile and say, “Well... it's not so much a matter of what we do as it is who we are.” 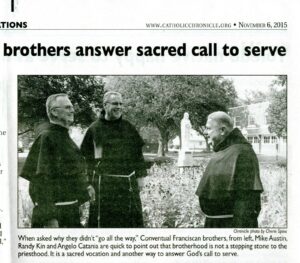 Religious brothers do many different things. They are retreat directors, teachers, professors, missionaries, nurses, administrators, chaplains, campus ministers, social workers, carpenters, cooks, writers, artists, and many other things. But their unique and oftentimes overlooked vocation is to be a certain kind of man in this world.

All of the baptized have been called to a life of holiness and to give witness to Christ in their lives. Whether one is married, ordained, single, or a religious, each person expresses that universal call of baptism in a particular way. For religious, living the vows of poverty, chastity, and obedience give witness to the life of Christ, and to the future resurrected life of all humanity in the heavenly kingdom. Consecrated religious are called to be a light within the Church as the Church is meant to be Christ's light in our world.

Religious priests, sisters, and brothers all partake in this kind of witness, but each in their own way. They remind the Church that we are all sisters and brothers in Christ with the same Father in Heaven. Women religious offer the unique gift of sisterhood and make known the feminine experience and reality of a life in Christ. Brothers, as men who live in community and as brothers to the human family, similarly are witnesses to fraternity in a world that is so often divided and in which human relations at all levels are breaking down. Just as religious sisters bring to the Church their unique gifts as women, so brothers, with a masculine perspective, offer their gifts to the Church as men. 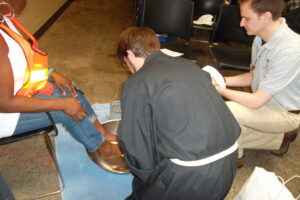 There is something especially counter-cultural about the brotherhood vocation. Often I am asked, “So why don't you become a priest?” or “Why not go all the way?” There is something subversive about men who willingly choose to pursue paths in life which eschew roles of direct authority, that necessarily put them under the authority of others. It is startling to some that a man, who has not followed the path of father and husband for the sake of a life committed to the Church, would not readily seek to become a priest.

Herein lies, I think, the distinct perspective that the brotherhood vocation offers. A religious brother lives out a calling to service in ways that the world does not expect for a man. A brother is not a parent nor pastor nor priest, but his vocation is not defined by what he is not. A brother is a brother, and like a brother in a family, he serves and relates with the other members in that unique capacity.

I think of growing up with my own brother. We were not friends, and he wasn't a parent to me, but we shared a bond that was unconditional. We were equally loved by our parents, yet, as he was the older and more experienced brother, I looked to him for leadership and guidance. Likewise, it isn't that brothers forgo or run from leadership and responsibility, but that they exercise their responsibilities in the Church familially, as brothers and equals to their fellow sisters and brothers in Christ.

Again, I am reminded of my own brother, who, though he does not yet have a family of his own, is quite the “family man” when we all get together – setting a light-hearted tone, helping at the grill, playing games with the grandkids. So too the religious brother is like that “family man” of the Church – not the parental figure, but one who walks with the People of God and enjoys the life in Christ with and among them.

Whatever I “do” as a brother, I hope that I will do it sincerely as one called to be a brother to others, a family man in the Church.