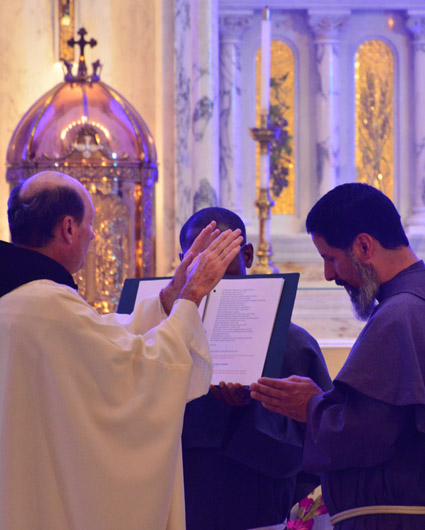 With his family and many of the Friars from the Province of Our Lady of Consolation in attendance, an emotional Br. Don vowed to follow in the footsteps of St. Francis of Assisi by living in poverty, chastity, and obedience. Also present were Capuchin Franciscan Friars who serve in the San Antonio area, as well as many of Br. Don’s other friends from across his home state of Texas.

After the Mass, the celebration continued with an Italian-flavored reception, filled with talking, laughter, and plenty to eat.

Br. Don will continue his ministry at Marytown in Libertyville, Illinois, north of Chicago. The National Shrine of St. Maximilian Kolbe (also a Conventual Franciscan), Marytown welcomes pilgrims and retreatants throughout the year. Br. Don will have the opportunity to share with them his love of Jesus Christ, his devotion to the Blessed Virgin Mary, and his deep commitment to sharing Franciscan fraternity and spirituality.