(Photo by Friar Marty Breski - Pope Francis talks with Bartholomew I, Archbishop of Constantinople and Ecumenical Patriarch of the Eastern Orthodox Church)

Leaders of the world religions gathered in Assisi to pray for peace on Tuesday, September 20th. This is the 30th anniversary of the Spirit of Assisi,  an event started by Pope John Paul II in 1986. Fr. Jim Kent, Minister Provincial, was in Rome for a meeting of the Conventual Franciscan Order's leadership from around the world. The leadership meeting attendees journeyed to Assisi to join in the prayer for peace. 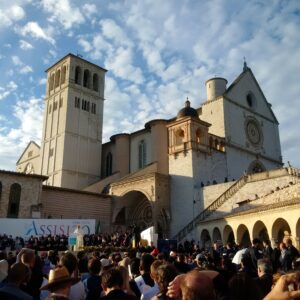