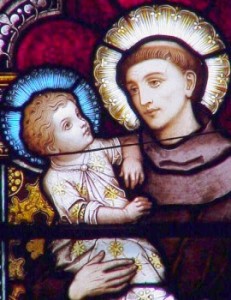 The man who would become the most famous Franciscan after St. Francis himself was baptized Ferdinand when he was born in Lisbon, Portugal. At an early age, perhaps only 15, he joined the Canons Regular of St. Augustine. Seeking more privacy after many visits from relatives and friends, he transferred to what he hoped was a more secluded Monastery.

But in his heart was a great zeal for spreading the Gospel. This desire grew after he met and developed great admiration for some Franciscan Friars, just before they left for Morocco where they were martyred. Thus inspired, he joined the Friars Minor and was given the name Anthony.

Anthony himself journeyed to Africa, but he became ill and was never able to actually do any missionary work. When Spring came, he boarded a ship bound for Portugal but a storm took him to Sicily instead. There the Friars nursed him back to health and took him to the General Chapter in 1221, where he saw and heard St. Francis.

As a Friar, he preached throughout Italy and Southern France. Francis himself, aware of Anthony’s great humility and profound knowledge of Sacred Scripture, commissioned him to teach theology to the young Friars at Bologna. After Francis’ death in 1226, Anthony was named Provincial (religious superior of the regional Franciscan community) of Northern Italy. He traveled throughout the entire area caring for the Friars and preaching to the people (1227-1230).

During this time he started writing his book of sermon guidelines. After his term as Provincial he moved outside the city of Padua, to Camposampiero, to continue work on his book. During the Lent of 1231, he preached to enormous crowds in Padua and administered the Sacrament of Reconciliation through the day and well into the night.

Severely weakened by his life of strenuous ministry, he died on June 13, at Aracoeli, on his way to Padua where he was being taken for medical treatment. He was canonized on May 30, 1232.

An examination of his remains in February 1981 revealed that he was tall for men of his time (5’6”). He had walked much and spent long hours on his knees. The cause of his death seems to have been exhaustion since there is no trace of a disease or pathological condition. When his tomb was opened in 1261, his tongue was found preserved. It is still venerated in a reliquary in his Basilica in Padua, Italy. The most recent examination showed that his vocal cords are also preserved intact.

Throughout the ages, people have venerated him as a Wonderworker. Immediately after his death there occurred a series of miracles attributed to his intercession. His rapid canonization, less than a year after his death, was hastened because of these miracles, but his holiness and deep love of God were obvious to all around him, both his brothers and lay people.

Today he is known as the Saint who always answers. As poor brothers of St. Anthony, let us pray for you. 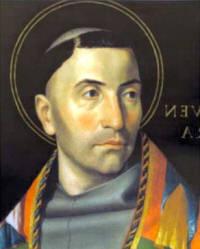 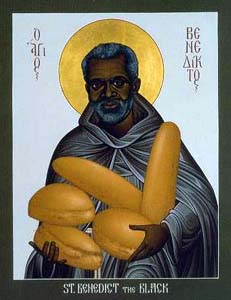 To read about other early Franciscan saints, click on their pictures.