Francis was born in Assisi, Italy, around 1182, the son of a wealthy cloth merchant. He was a popular, handsome young man who embraced the values of the emerging middle class: wealth, fine clothes, festive music, and raucous parties with his friends. He dreamed of knighthood and a noble title; ambitions supported by his ambitious father. It was all there before him.

But war and captivity, followed by a long, serious illness brought those dreams crashing down around him. A long convalescence followed. Francis had changed. It seemed he was a different person.

One day Francis happened upon the small, broken-down chapel of San Damiano near Assisi. Venturing inside, Francis knelt before the now famous painted crucifix.

He heard the voice of Jesus speaking to him from the crucifix: "Go and repair my house which, as you see, is falling into ruin."

Francis responded immediately. He embraced the life of a hermit, wearing only a ragged tunic and begging for his food. Then he followed the command from the Cross, literally: he began to rebuild the chapel.

This was all too much for his father, who besides facing public ridicule, had seen the end of his dream of a knighted son. The inevitable confrontation led to a public rejection of his father and his patrimony, and marked a shift in his values. 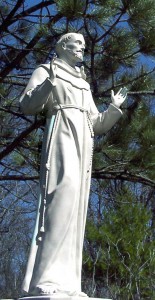 From this point on, Francis would rely on God alone.

After rebuilding several churches around Assisi, Francis began to work with lepers in the area, and then to preach to the people. His message of God's eternal love, poured out in the Crucified Christ, moved the hearts of many, including the Bishop of Assisi.

At this time, Francis began to attract his first brothers, or Friars. He instructed them in poverty, chastity, and obedience. Loyal to the Gospel and the Church, the Franciscan movement soon spread beyond Assisi.

The Church formally recognized the Franciscan community by oral proclamation in 1209, and then later approved the Rule written by Francis in 1223.

The final years of Francis' life brought him to an intimate bond with Christ through suffering. He bore the physical wounds of Christ, known as the Stigmata. He was physically ill and nearly blind. Years of penance and fasting had taken their toll.

Francis died at the Portiuncula Chapel near Assisi in 1226. Already considered as such by the people, Francis was formally declared a saint by Pope Gregory IX in 1228. The process of his canonization was one of the swiftest in history. He is buried in the Basilica of Saint Francis in Assisi. His feast day is celebrated on October 4.