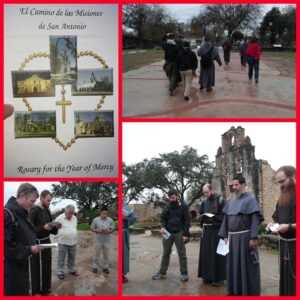 On Sunday December 13,  Fr. Paul Schloemer, Province Formation Director, led the Conventual Franciscan student friars and postulants from San Damiano Friary, along with Capuchin Franciscan student friars, as they walked a El Camino de las Misiones de San Antonio. The pilgrims began early in the morning at Mission San Francisco de Espada and ended their journey in the afternoon at San Fernando Cathedral, where they passed through the Holy Door and had Mass.

Please keep our students in your prayers as they will keep you in theirs. 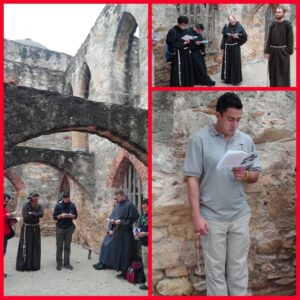 Rosary for the Year of Mercy

Reading 1 (A Letter to Brother Leo) – Brother Leo, health and peace from Brother Francis! I am speaking, my son, in this way—as a mother would—because I am putting everything we said on the road in this brief message and advice. If, afterwards, you need to come to me for counsel, I advise you thus: In whatever way it seems better to you to please the Lord God and to follow His footprint and poverty, do it with the blessing of the Lord God and my obedience. And if you need and want to come to me for the sake of your soul or for some consolation, Leo, come.

Reading 2 (2 Tim. 3: 14-17) – But you, remain faithful to what you have learned and believed, because you know from whom you learned it, and that from infancy you have known [the] sacred scriptures, which are capable of giving you wisdom for salvation through faith in Christ Jesus. All Scripture is inspired by God and is useful for teaching, for refutation, for correction, and for training in righteousness, so that one who belongs to God may be competent, equipped for every good work

Reading 1 (Later Admonition and Exhortation vv- 40-44) – We must also deny ourselves and place our bodies under the yoke of servitude and holy obedience as each one has promised to the Lord.
And let no one be bound to obey another in anything in which a crime or sin would be committed. Instead, let the one to whom obedience has been entrusted and who is considered the greater be the lesser and the servant of the other brothers. And let him have and show mercy to each of his brothers as he would want them to do to him were he in a similar position. Let him not become angry at the fault of a brother but, with all patience and humility, let him admonish and support him,

Reading 2 (John 8: 3-11) The scribes and the Pharisees brought a woman who had been caught in adultery and made her stand in the middle. They said to him, “Teacher, this woman was caught in the very act of committing adultery. Now in the law, Moses commanded us to stone such women. So what do you say?” They said this to test him, so that they could have some charge to bring against him. Jesus bent down and began to write on the ground with his finger. But when they continued asking him, he straightened up and said to them, “Let the one among you who is without sin be the first to throw a stone at her.” Again he bent down and wrote on the ground. And in response, they went away one by one, beginning with the elders. So he was left alone with the woman before him. Then Jesus straightened up and said to her, “Woman, where are they? Has no one condemned you?” She replied, “No one, sir.” Then Jesus said, “Neither do I condemn you. Go, [and] from now on do not sin any more.”

Reading 1 (True and Perfect Joy, vv. 7-15) “Then what is true joy?” “I return from Perugia and arrive here in the dead of night. It’s winter time, muddy, and so cold that icicles have formed on the edges of my habit and keep striking my legs and blood flows from such wounds. Freezing, covered with mud and ice, I come to the gate and, after I’ve knocked and called for some time, a brother comes and asks: ‘Who are you?’ ‘Brother Francis,’ I answer. ‘Go away!’ he says. ‘This is not a decent hour to be wandering about! You may not come in!’ When I insist, he replies: ‘Go away! You are simple and stupid! Don’t come back to us again! There are many of us here like you—we don’t need you!’ I stand again at the door and say: ‘For the love of God, take me in tonight!’ And he replies: ‘I will not! Go to the Crosiers’ place and ask there!’ “I tell you this: If I had patience and did not become upset, true joy, as well as true virtue and the salvation of my soul, would consist in this.”

Reading 2 (Col. 3: 12-17) – Put on then, as God’s chosen ones, holy and beloved, heartfelt compassion, kindness, humility, gentleness, and patience, bearing with one another and forgiving one another, if one has a grievance against another; as the Lord has forgiven you, so must you also do. And over all these put on love, that is, the bond of perfection. And let the peace of Christ control your hearts, the peace into which you were also called in one body. And be thankful. Let the word of Christ dwell in you richly, as in all wisdom you teach and admonish one another, singing psalms, hymns, and spiritual songs with gratitude in your hearts to God. And whatever you do, in word or in deed, do everything in the name of the Lord Jesus, giving thanks to God the Father through him.

Mission Concepción
4th Decade of Mercy – To comfort the afflicted.

Reading 1 (The Later Rule, Ch. 6 vv. 7-9) – Wherever the brothers may be and meet one another, let them show that they are members of the same family. Let each one confidently make known his need to the other, for if a mother loves and cares for her son according to the flesh, how much more diligently must someone love and care for his brother according to the Spirit! When any brother falls sick, the other brothers must serve him as they would wish to be served themselves.

Reading 2 (Luke 13: 10-17) – Now he was teaching in one of the synagogues on the sabbath. And just then there appeared a woman with a spirit that had crippled her for eighteen years. She was bent over and was quite unable to stand up straight. When Jesus saw her, he called her over and said, "Woman, you are set free from your ailment." When he laid his hands on her, immediately she stood up straight and began praising God. But the leader of the synagogue, indignant because Jesus had cured on the sabbath, kept saying to the crowd, "There are six days on which work ought to be done; come on those days and be cured, and not on the sabbath day." But the Lord answered him and said, "You hypocrites! Does not each of you on the sabbath untie his ox or his donkey from the manger, and lead it away to give it water? And ought not this woman, a daughter of Abraham whom Satan bound for eighteen long years, be set free from this bondage on the sabbath day?" When he said this, all his opponents were put to shame; and the entire crowd was rejoicing at all the wonderful things that he was doing.

Reading 1 (1 Celano, Book 2, Ch. 9) – At Francis' death, a whole crowd of people praising God came together and said: “You, our Lord and God, be praised and blessed, for you have given us unworthy ones so precious a remnant! Praise and glory to you O ineffable Trinity!” The whole city of Assisi rushed down as a group and the entire region hurried to see the wonderful works of God which the Lord of majesty gloriously displayed in his holy servant. Each person burst int a song of joy at the urging of a joyful heart, and all of them had their desire fulfilled and blessed the almighty Savior. Still his sons were mourning, bereft of so great a father, and showed the deep feeling of their hearts in groaning and tears.

Reading 2 (2 Maccabees 12: 42-46) – Turning to supplication, they prayed that the sinful deed might be fully blotted out. The noble Judas exhorted the people to keep themselves free from sin, for they had seen with their own eyes what had happened because of the sin of those who had fallen. He then took up a collection among all his soldiers, amounting to two thousand silver drachmas, which he sent to Jerusalem to provide for an expiatory sacrifice. In doing this he acted in a very excellent and noble way, inasmuch as he had the resurrection in mind; for if he were not expecting the fallen to rise again, it would have been superfluous and foolish to pray for the dead. But if he did this with a view to the splendid reward that awaits those who had gone to rest in godliness, it was a holy and pious thought. Thus he made atonement for the dead that they might be absolved from their sin.

A Prayer for the Year of Mercy (Pope Francis)

Lord Jesus Christ,
you have taught us to be merciful like the heavenly Father,
and have told us that whoever sees you sees. God.
Show us your face and we will be saved.
You are the visible face of the invisible Father,
of the God who manifests his power
above all by forgiveness and mercy:
let the Church be your visible face in the world.
Send your Spirit and consecrate every one of us with its anointing,
so that the Jubilee of Mercy
may be a year of grace from the Lord,
and your Church, with renewed enthusiasm,
may bring good news to the poor,
proclaim liberty to captives and the oppressed,
and restore sight to the blind Amen.

Passage through the Holy Door and Mass.