Serving in Zambia for more than 50 years, Br. Tony talks about his arrival in Africa and journey to Zambia. This episode of our podcast Franciscan Voice includes some of his stories from the 1960s to the 80s.

In a small group session during a weekend retreat at Mount St. Francis in southern Indiana, a woman talked about her experience in jail. She had found a book there with a quote she couldn’t forget: no matter how crooked your path in life has been, God can cut a straight line right through it, leading back to Him. Later that day, during Mass, a friar used that very same image in his homily.

To the women, it was more than coincidence – it was confirmation that God wanted them here.

Four times a year, Mount St. Francis hosts the Ignatian Spirituality Project: Spiritual Retreats Ending Homelessness. The program was created 20 years ago by Fr. Bill Creed SJ, and has spread to 30 cities around the US.

The program came to Louisville five years ago. In 2016 Friar Bob Baxter OFM Conv. brought the retreat to the Mount, knowing that St. Francis of Assisi would want it here.

The retreats are for groups of no more than 15 men or women, who have been sober for at least two months and have experienced homelessness in the past. The attendees are those who need help as they move through the 12 Steps, or those whose counselors believe would benefit from a formal retreat experience.

“They have never been on retreat before,” said Judy Ribar, Associate Director of Retreats at Mount St. Francis, who coordinated the weekend. “Most don’t understand how God could love someone like them. Others may know that God loves them, but need a little help staying strong in their sobriety and faith life.”

The retreatants leave their recovery centers at 8 am Saturday and stay at the Mount through lunch time on Sunday. Their brief stay has scheduled prayer and group meetings. But ample time is allowed for enjoying the gifts of nature at the Mount. The attendees explore the area around the lake, enjoy a bonfire, and have free time to roam.

And “where two are three are gathered…”

The Holy Spirit spent the weekend making connections. A woman facing a challenging relationship met someone who had been through the same thing. A pregnant woman learned of a pregnancy center where she can go after she leaves her recovery center.

Finally, before leaving the Mount, the retreatants write a letter to God. Three weeks later they will have a follow up meeting at another location. During that half-day session they will participate in two more exercises, designed to help them stay strong in their program.

Fr. Wayne Hellmann OFM Conv. met the women briefly late Sunday morning and explained a little about the Franciscans and life at the Mount. He was impressed by the women and the program, saying: “May our retreat centers find funding to provide more service to those in such need.”

Fr. Wayne Hellmann challenges us to follow St. John the Baptist by being truth-tellers in a world where the truth is not always valued. 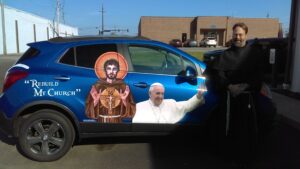 What does this mean? Fr. John Bamman discusses this difficult passage focusing on:
How do we know we are doing what God wants us to do?

And it takes work to keep it that way! Check out the latest episode of Franciscan Voice!

The Book of Revelation (the Apocalypse) is confounding, confusing, and mysterious. But Friar Jude Winkler OFM Conv. simplifies it for us, breaking it down to a very personal level.