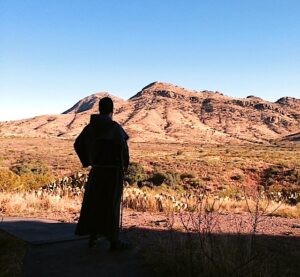 I’ve been in New Mexico at Holy Cross Retreat Center for my summer ministry since May 23rd. This past weekend I had the pleasure of shadowing our director at Holy Cross, Fr. Tom Smith, OFM Conv. on his “Desert & Mountains” retreat. I’d like to share a short reflection on a couple of spiritual moments during this retreat.

Both occurred on Saturday evening. We journeyed a half hour away to the foot of the Organ Mountains for a walk to a cave where a hermit once lived, where we would also celebrate Mass later in the evening. We had only just begun our journey to the cave when we came upon a lady who appeared in distress. One of the ladies I was on retreat with stopped with me, and we spoke to her. Indeed she was lost, separated from her family.

We showed her the trail that leads out and assured her we could give her a ride back if needed. Continuing our walk we came upon her sister, and still later a group of about six children and one other adult who were gathered in the shade of the cave, which was our destination. Our group immediately noticed their condition and offered water and the consoling news that we had spoken with both of their mothers, and they would soon be back and all together again, which was indeed the case. 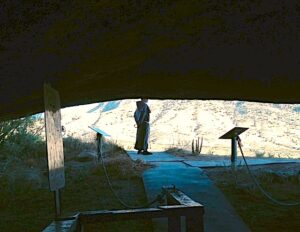 About half an hour later we began our Eucharistic celebration, just prior to sundown. The Mass, as you can imagine, had quite a different feel to it. We were surrounded on three sides by mountains, and in front of us was the cave opening which gradually slopes down to the valley below. We were celebrating Mass in the grand Cathedral created by Our Heavenly Father, to which none can compare.

Then during the first reading we heard words such as: “Whoever is in Christ is a new creation…the old things have passed away…behold, new things have come.” Later we heard that we are to be ambassadors for Christ.

I could not help but reflect how on our retreat we were opening ourselves up to Christ, seeking to let go of old “things” and become that new creation spoken of in the reading. Also I thought how in a little way the entire interaction with those lost people we met could be an example of being ambassadors for Christ.

Bringing values from God’s Kingdom to life now in this world, in no way trying to preach to them or convert, we merely offered what we had: water and some Christian kindness during a stressful time for them. I thanked God for the awareness to notice the distress on their faces and the prompting of the Holy Spirit to comfort them. And in this small way we could be Christ for them, just as we recognized and cared for Christ in them. 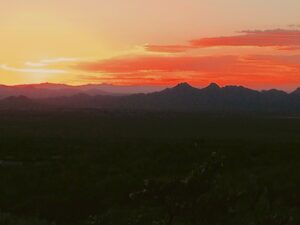 After Mass, we stayed for several hours watching not only the sunset but also the stars as they came out and illuminated the night skies with their own beautiful light. As I looked around at the mountains surrounding us on three sides, I felt like this whole evening took place in the arms of God. Those mountains were cradling us on three sides, as if supporting us in His loving arms as we also lovingly supported others. The Mass at the center of the opening leading to the valley I envisioned as the open arms where God’s children are free to walk in and join Him, or stray away if what is the True Center of our lives is lost.

I thank God for this experience, and pray that all God’s children make the spiritual journey through the valley of this world, up to God’s mountain to live forever in His Loving protection.