Two people who had the most influence on the Catholic Church in the 20th century were Popes John XXIII and John Paul II. Pope John opened the Church to the modern world and made Catholicism more accessible to people around the globe. Pope John Paul pointed out clearly the shadows of the modern world, such as communism, materialism, and the culture of death. He traveled far and wide to bring the Good News of our Catholic faith to the whole world. On April 27, 2014, Pope Francis will canonize both these giants as Saints of the Church. 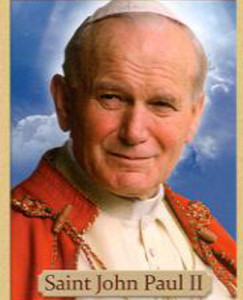 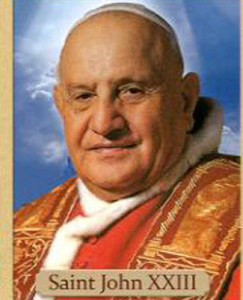 I remember Pope John’s funeral when I was a young schoolboy, and how sad the nuns were. I later read how people called him the “Good Pope” for his wonderful manner with people of all faiths. He had the knack for saying just what was needed, and wasn’t afraid even in his advanced years to take on a huge undertaking like the Second Vatican Council. Pope John Paul was the playwright and actor, the outdoorsman and skier, who survived World War II to become a priest. He was fearless in his witness of Catholicism, wrote numerous encyclicals, books, and a new Catechism. He wasn’t afraid to let the world see him slowly succumb to disease.

Through the grace of God, I have been given the opportunity to attend their canonization in Rome. I can’t express what this will mean, especially with Pope Francis (!) presiding at their Canonization Mass. To attend such an event with millions of others is simply hard to fathom.

In gratitude for your support, I would like to carry with me to the Canonization Mass your prayer petitions, and ask our newest saints to intercede before God for your needs. There is a separate intention slip in this newsletter that you can return. Or, better yet, send your petitions to me through our website: Franciscansusa.org. While in Rome, I will also say Mass for you and your loved ones, living and deceased.